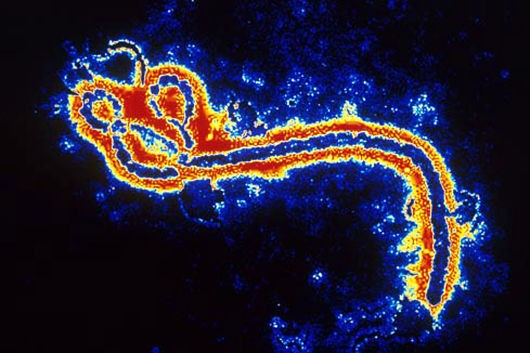 When the Ebola virus attacks the human body, the symptoms include muscle pain, vomit, fever and unexplained hemorrhage. While these symptoms are tragic and often fatal, there are no surprises when it comes to the virus itself—we know what it looks like and we can visibly see the damage it leaves in its wake. When the Ebola virus attacks an economy, however, as it did in Liberia in 2014, we know little about the exact symptoms and even less about the treatments available to combat it.

Until 2014, Chid Liberty, the founder of fair trade clothing manufacturer Liberty and Justice, had run his operations out of his native Liberia with ease. This changed almost overnight with the Ebola outbreaks of 2014.

“We had built the company up to a 500,000 orders per month and in a flash we were out of business,” Liberty said in an interview with Madame Noir. “The Ebola epidemic left us and the hundreds of workers and families that were depending on us stranded without income.”

Our economies are just as vulnerable as our immune systems, and can succumb to Ebola just as easily. It is estimated by the World Bank Group that nearly 50 percent of working adults in Liberia lost their jobs after the outbreak. However, Liberty refused to close his doors at the behest of the disease. Instead he turned his ingenuity into a tonic for the symptoms of Ebola and founded UNIFORM, a company based in Liberia dedicated to making affordable school uniforms for children who had been forced to leave school due to Ebola.

Liberia already has one of the lowest rates of primary education enrollment rates in Africa. According to The Global Economy website, an average of only 53.85 percent children reported having completed primary school between 1978 and 2011.

School attendance often incurs costs far beyond those of just tuition—the prices of books, the inability to work a salaried job, and even the cost of the mandatory uniform act as considerable deterrents to struggling families. The uniforms especially act as barriers to school attendance. Abdul Latif Jameel confirmed this in his 2009 study in Kenya, in which he discovered that providing children with free uniforms reduced school absenteeism by 44 percent and decreased dropout rates (particularly among girls) by a third.

Liberty’s UNIFORM brand has embraced the challenge of mollifying the effects of Ebola on the education of Liberia’s children. Their kick starter campaign, which has $174,760, has already given away 7,000 new school uniforms, all of which are being manufactured by small factories throughout Liberia (Madame Noir).

“I am very proud to be working on such a project,” said Ms. Annie Blamo to the UN Ebola Response team. Blamo is a worker in the Monrovian Liberty and Justice factory who has been manufacturing uniforms for the N.V. Massaquoi school, Blamo’s eight-hour days paid off when her son returned to school in early May. “We are so happy for what this factory has done for the children at the N.V. Massaquoi school and their name will be forever remembered.”