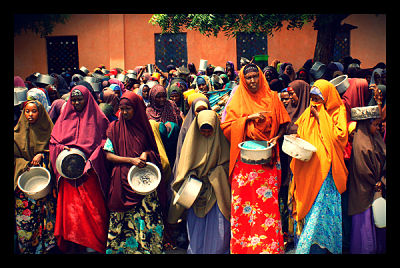 Earlier this month the United Nations estimated that 258,000 people died in the Somalia famine between October 2010 and April 2012. The number of deaths caused widespread shock and the percent of the population – 4.6% – was shockingly high.

Stephen Devereux, an economist at the Institute of Development Studies, University of Sussex, declared that deaths attributed to famine rarely exceed 2-3% of a country’s population, but the absolute death toll was not especially high by recent historical measures. Mr. Devereux reckons that in the 35 big famines since 1900, more than 70 million people have died from famine or famine-related causes. Of these, almost half perished in one terrible event: China’s Great Leap Forward of 1958-1962, which caused famine deaths of over 30 million. Another quarter died during Stalin’s forced collectivization of the Soviet Union in the late 1920s and early 1930s (especially in Ukraine and Kazakhstan). The other huge famine was that in Bengal in 1943.

Since these countries have transformed their food security, famine mortality has declined over the past century and shifted from Asia too, almost exclusively Africa. Political crises have triggered famines in sub-Saharan Africa since the 1960s, including those in Ethiopia in 1983-1985 and Sudan in 1998. The rains failed throughout the Horn of Africa in 2010-2012, but famine deaths were concentrated in Somalia, where the government was weakest.

Looking at the data collectively however, there has been much progress made. With the majority of famine deaths being eliminated on every continent except Africa, there is an obvious sign of hope.

Improvement is a slow process, but it is evident that it is possible.

What is International Relief and Development?Rural Poverty in Azerbaijan
Scroll to top