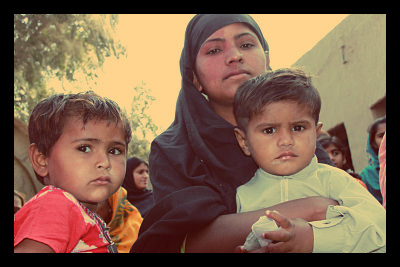 As the sixth most populous country in the world, Pakistan has an estimated population of 173 million people, with almost 55 percent being of childbearing age. Currently, the country has the highest total fertility rate in South Asia, which many attribute to the large amount of child marriages.

More than half of the women get married by the age of twenty, while almost 15 percent are married by the age of fifteen. Since females tend to marry young, contraceptive prevalence has remained at a mere 30 percent due to a lack of reproductive education and the fact that young girls are easily manipulated by their husbands to not use contraceptives. Lack of health education, lack of access to health facilities and lack of funding all lead to lower use of contraceptives.

A majority of Pakistan’s population is Muslim, and the influence of religion is prevalent in all aspects of life, including family planning. Women have a great fear of social disapproval by religious leaders and family members that would come from the use contraceptives.

With the Government of Pakistan only spending around 2 percent of its budget for education and health services, problems arise regarding access to health facilities and family planning services. The lack of funding has resulted in a very low contraceptive prevalence rate, leading to almost 25 percent of pregnancies being unintended. These higher rates of unwanted pregnancies contribute to unsafe abortions and higher maternal mortality rates.

Poverty also plays a key role in determining the size of the family, with roughly 22 percent of citizens living below the poverty line. Many believe that having more children will generate a greater source of income for the family since those children can be put to work, but having more mouths to feed can also perpetuate the cycle of poverty.

In order to address the issues of family planning and maternal health, it is important for the government to address the root causes of the problem. There is significantly less access to healthcare in the rural parts of Pakistan, so there needs to be a push to improve infrastructure and establish health clinics closer to these parts of the country. Health and sex education is also essential in order to stop the country from overpopulating.

Unfortunately, the poor suffer disproportionately when accessing health care in underdeveloped countries. Poverty is associated with an increase in many of the medical risk factors associated with pregnancy outcomes. Success depends on gaining a local understanding of the dimensions of access to health care services, along with sustained efforts by national governments and the international community to improve family planning services for the poor.