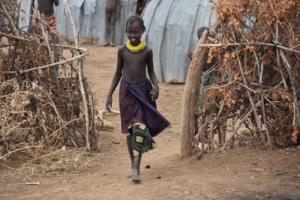 Ethiopia is the second most populous country in Africa, with 94.1 million people. Poverty has long been an issue for Ethiopia, and while many remain under Ethiopia’s poverty line of earning $1.25 a day or less, the nation has made great strides in the past 10 years to reduce poverty and improve health.

Ethiopia’s economy has been thriving in the recent past. Between 2004 and 2011, the economy grew at a rate of 10.6 percent per year. Ethiopia increased exports in order to help it account for this economic growth, and that has led to more prosperity throughout the country.

This decrease in poverty can also be attributed to strides in agriculture. In 2005, Ethiopia introduced new agricultural practices which resulted in increased production. As The World Bank states, this agricultural growth has allowed for a 4 percent reduction in poverty each year. The use of fertilizer, along with high food prices and good weather, has given poor farmers with access to markets a higher income.

Ethiopia also instituted the Productive Safety Net Program (PSNP). The World Food Program writes that there are 7.4 million people participating in the PSNP. The program works to end chronic food insecurity through transfers of food or cash (or a combination of both).The PNSP asks that those who are able-bodied in the households who receive their help participate in activities which will help them have more resilient livelihoods and less chance of food insecurity. These activities include building community infrastructure, such as building schools, roads, and hospitals, and rehabilitating land and water resources. The PSNP has helped 1.5 million people who were in poverty to be lifted out of poverty.

Economic growth, an increase in agricultural production, and programs such as the Productive Safety Net Program have paid off. From 2000 to 2011, poverty in Ethiopia declined from 44 percent to 30 percent. As the World Bank says, this “translates to a 33 percent reduction in the share of people living in poverty”.

This decrease in poverty has helped the health of Ethiopians as well. From 2010 to 2015, the level of child mortality has been lowered by two-thirds. The average lifespan has also increased by about an year annually from 2005 to 2011, making an Ethiopian’s lifespan 63. Malnutrition rates have come down as well. 75 percent of the population was malnourished in Ethiopia in 1990, while today it has fallen to 35 percent.

Since 2004, four million Ethiopians have been able to rise above the poverty line. However, there is still work to be done. 25 million people in Ethiopia are still suffering from poverty. The World Bank suggests that in order for the trend of a decrease in poverty to remain, ongoing efforts to promote self-employment have to continue. Firms have to enter Ethiopia, and urban migration has to be encouraged.