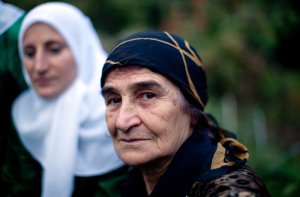 The concept appears as a relic from a distant, barbarous past: “honor killings” of young women. In contemporary Russia’s Northern Caucasus, however, honor-based violence remains a persistent scourge. Honor killings are premeditated murders of young women by close male relatives, committed under the guise of restoring or preserving a family’s “honor.” Honor crimes occur when a woman is perceived to have overstepped established sexual and gender-based boundaries.

Incited by rumors, slander and outright falsehoods, honor-based attacks victimize women for trivial, seemingly inconsequential acts. These acts could include a skirt hemmed above the knees, a wayward glance, or an air of obstinance. These murders are generally planned by more than one family member, and carried out in many different forms such as including stonings, forced suicides and acid burnings.

A 2018 report by the human rights lawyer Yulia Antonova found that from 2012 to 2017, there were at least 36 reported honor killings in the Northern Caucasus. That number only includes, however, documented and cross-referenced honor killings. The majority of the killings go unreported, un-investigated, or are dismissed by the authorities. Therefore, there is a lack of accurate data on this type of violence in not only the Northern Caucasus, but the entire world. The United Nations Population Fund estimates that 5,000 women are murdered every year by relatives in the name of protecting family “honor.”

The Intersections between Violence, Gender Inequality and Family Ties

Honor-based violence is a tool to perpetuate gender inequality and a manifestation of female sexuality being coerced and curtailed through brutality. These killings are not spurred by tradition, custom, or sharia law, but rather are motivated by the ambitions of the individual or group. According to Svetlana Anokhina, a journalist and human rights activist in the Northern Caucasus, men hide behind skewed notions of honor to justify cold-blooded murder. These killings are meant to convey the control men wield over women, determining life or death through extra-judicial, subjective reasoning.

The state implicitly condones honor-violence by failing to adequately prosecute cases involving honor killings. These killings are rarely reported, and even the exceptions hold no guarantee that the cases will be investigated and sent to trial. Indeed, another 2018 report found that over a period from 2008 to 2017, only 14 cases involving honor killings went to court. Defendants are often protected by the courts, who justify honor killings by arguing that the accused was acting under a state of emotional duress.

In addition to the state, family members also will frequently protect the murderer, unwilling or unable to give their relative over to the authorities. The family may also rally behind the murderer, believing the honor killing has enhanced their social status in the community.

Thus, the victims of honor killings oftentimes do not get justice or retribution, and the cycle of violence is allowed to continue.

Over the last decade non-governmental organizations, such as the Honour Based Violence Awareness Network (HBVA), have sought to coordinate international groups working to end the scourge of honor-based violence. HBVA is a digital resource center promoting awareness of honor killings through research and documentation, enabling experts to better understand the extent of the issue. In part due to HBVA’s research, the international estimate of 5,000 honor killings per year is now thought to be grossly short of reality. HBVA has also created an international network of experts, activists and NGOs intent on using a collaborative approach to educate the public about and support the victims of honor killings. The training HBVA provides has improved responses to instances of honor violence in migrant communities in Europe and North America.

Honor killings continue to be an underreported and misunderstood phenomenon in many corners of the world. Victims of honor killings are subject to arbitrary fits of violence, intended to perpetuate gender inequality. This form of violence is vastly underreported, with many killings either ignored or lightly prosecuted by authority figures. There are, however, reasons to be optimistic that honor killings in the Northern Caucasus and other parts of the world are becoming less socially acceptable. Non-governmental organizations seeking to end honor killings are working across international borders to pool resources and data, giving hope that this form of violence will one day be better understood, more thoroughly documented and less frequent.

The Nonprofit VAMOS! Combats Poverty in Mexico6 Facts About Hunger in Colombia
Scroll to top