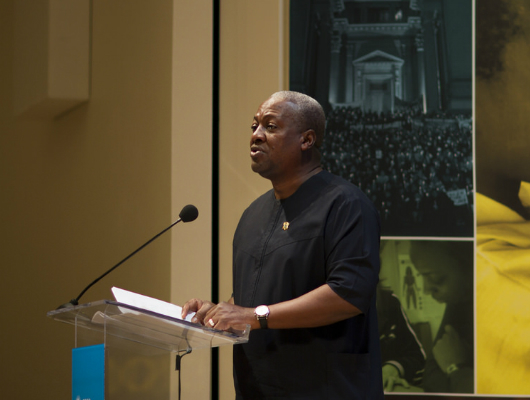 John Dramani Mahama is the President of the Republic of Ghana where over than 26 million people reside. Of note, with approximately 4.5 million of Ghanans currently live in poverty.

While this number sounds overwhelming, President Mahama has been focused on ending extreme poverty within his country. His most recent undertaking has been the Savannah Accelerated Development Authority or SADA.

The mission of SADA, according to its website, is to “catalyze the transformation of the NSEZ through citizens’ mobilization, strategic planning, successful coordination and collaboration and facilitation (CCF) for effective public sector delivery and private sector investment.”

The President met with World Bank leaders, including Dr. Jim Yong Kim on Oct. 16, urging them to support the SADA program.

In this meeting, President Mahama said that “although Africa had made some giant strides in reducing extreme poverty, there were still millions of people living in that condition, and expressed the hope that extreme poverty could be eradicated by 2030.”

Ghana has already implemented the following:

Despite the success thus far, President Mahama continues to push for further improvement to reach the goal of ending extreme poverty by 2030.

Through the SADA program, Ghana hopes to increase sustainability, professionalism, integrity, respect for diversity and trust for all stakeholders. In order to achieve this, it has outlined three main objectives:

With all of this in mind, President Mahama has expressed high hopes of success.

“Through the bank’s new guarantee scheme… we should be able to come out with another groundbreaking program to help put some real and concrete programs in place behind the call for eradication of poverty by 2030,” Mahama said in the meeting with the World Bank.

As of right now, the World Bank has agreed to support the program with the hopes that Ghana will continue to show improvements in terms of ending extreme poverty.