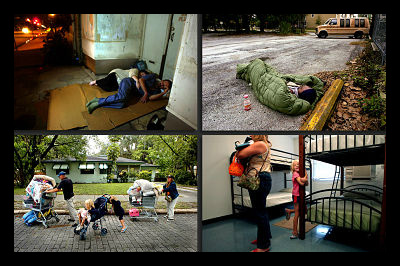 For those who fall into poverty, extracting one’s self from can be an excruciating and impossible feat. For one Florida town, systemic poverty is a threat to everyone and local ordinances can be utilized to identify how to assist those in need and the space to implement programs that can achieve justice.

In Jacksonville, a group of city leaders have identified a series of indicators that can be utilized to lift people out of poverty. The Florida politicians have claimed if seven of the nine assets are reached by individuals they can more than double their chances of rising out of poverty. These assets are not the same for everyone, and only two are statistically significant.

The poverty reducing project is called “1,000 in 1,000: Moving 1,000 people out of poverty in 1,000 days.” The project began in 2006 when city leaders came together to devise a plan to attack poverty and help people break the cycle that so many are trapped in.

They began by studying national research on poverty and then ran a pilot program over the course of five years. What they found was shocking. About 12 percent of residents live in poverty including one in six children. The typical family in poverty is a single woman with two or three children. She has a high school diploma, works two jobs and has no savings and high debt, often from student loans.

Officials have decided to reach out to these families and identify strategically what kind of assistance is needed. Helping the family is essential as the entire unit of individuals is trapped. Providing jobs and support creates stability and helps provide resources. Breaking barriers like the limitations from criminal records that can limit job opportunities and other denials of access. Bringing services together can help effectively target needy families, more effectively provide services and would be a better use of municipal resources.

Jacksonville is not alone in this poverty crisis. The United States has 15 million U.S. children living in poverty and nearly seven million young people out of school and without employment prospects.

Poverty is the single greatest threat to a child’s well-being and development. Poverty makes it harder to learn and is a contributing factor in chronic health conditions and risky behavior such as drug use, early sexual activity and crime.

When factors of poverty are accounted for, and the space and path for community uplifting expressed, poverty is not the daunting specter it currently parades as. The root causes of poverty are complex and there are no easy answers or quick cures.

When communities identify their members in need and provide at-risk youth and individuals with real world job experience and access to social services, there is a chance at success and way to break free of the poverty cycle. When we invest in each other and we allow ourselves to reach our full potential the protection of rights and the resources given in aid to others are no longer a liability but a necessary asset.

Sources: The Florida Times, The Huffington Post
Photo: In Our Own Backyard