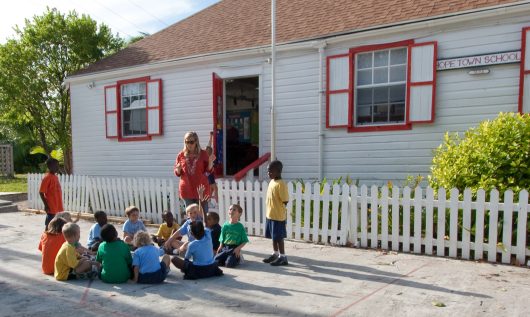 The quality of education in the Bahamas has been improving since the late 1950s. These improvements have been spurred on by leaders of the Bahamas Union of Teachers (BUT), which has recognized the failures of the previous education system.

The Education Act, which was revised in 1996, is the primary education law governing the Bahamas today. It guarantees free education for all residents between five and 16 years of age. About 75% of children attend public primary schools, but most nurseries and pre-schools are run by churches. There are 170 educational institutions in the Bahamas, which is a great number considering the population of the archipelago. In 2014, the Bahamas introduced the National High School Diploma, to create a standard for minimum basic education for every child. This was a big step in improving the education system by ensuring equal education for all children.

In the nation, over 100% of children received primary education in 2006 and this trend has been continuing into the present. This is a very impressive rate, especially given that there is no disparity between access to education between boys and girls. In 2003, the literacy rate for adults ages 15 and over was 95.5%. This percentage was even higher for young adults aged 15 to 24. Most of the population in the Bahamas is under 60 years old, meaning that the education system in the country has been relatively successful in having literate citizens since the 1960s.

A few years ago, the Minister of Education, Science and Technology gave a statement about recognizing the need for a larger skilled workforce. The government invested $4 million in Information and Communications Technology in public schools to better prepare students for a technologically advancing world. Career Academies were implemented in high schools to allow students to gain specific skills for the job market. These skills include hospitality management and business studies, which should help them get jobs in the Bahamian tourism industry.

The Minister also indicated that the Bahamas would focus on developing better quality teachers. An In-Service Professional Development Institute was opened to provide standardized and more effective training for teachers and other educators in the country. These programs are still in development but have proven to be valuable steps forward for the nation.

Ultimately, education in the Bahamas is on the right track, as the government is prioritizing high-quality education for all. They should continue to implement new and improved programs, as well as start focusing on increasing the number of residents who have access to, and attend, higher education institutions. With these current programs and a steady plan for improvement in the future, the Bahamas can surely create an excellent education system for it citizens.