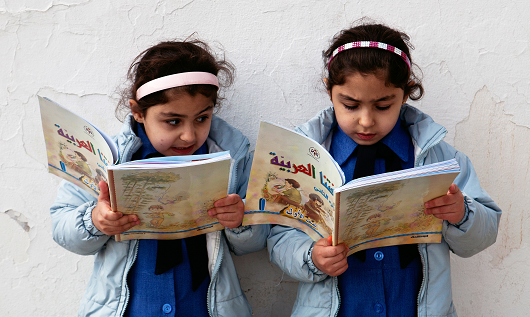 In 2011, tens of thousands of people took to Egypt’s streets to demand economic and political reform. Four years after the revolution, Egypt has seen many changes in leadership and policy. But how much has really changed for the country’s education system?

While Egypt has the largest public education system in the Middle East, it has one of the region’s lowest rates of public funding. Public schools are overcrowded, with classes of up to 100 students. Few schools have funds for suitable playgrounds or music and art programs.

Egyptian schools follow a rigid curriculum enforced by the central government. Since lessons focus solely on memorization, students have no chance to develop critical thinking skills.

Salma Wahba, UNICEF Egypt’s Youth and Adolescent Development Officer, has criticized Egypt’s education system, saying that it does not adequately prepare the country’s youth for the modern job market.

The Cairo Post reports that since the uprisings, Egypt’s youth unemployment rate has reached nearly 29 percent. Students who fail to develop marketable skills will go on to join the ranks of the young unemployed, Wahba says.

One of the main obstacles facing the Egyptian education system is the low wages for teachers. A study by British think tank Chatham House shows that teachers rarely make more than $281 a month.

Teachers are allowed to offer private lessons for additional fees. This leaves many underpaid teachers with little to no incentive to qualitatively teach. Students from poor families cannot afford private tutoring and consequently fall behind.

Although 2012 statistics from the Ministry of Education reported primary school enrollment rates at 93.3 percent, children can often be seen out in the streets during school hours. This discrepancy suggests that teachers frequently misreport student attendance.

The political instability of the past four years has also affected education in Egypt. Textbooks and curriculums that once favored the authoritarian regime of Hosni Mubarak were changed to favor the Muslim Brotherhood. The books then changed again to suit the agenda of current president Abdel Fattah al-Sisi.

Even Egyptian private schools, which cater mostly to middle-class families, are far from well-run.

“Parents are proud to enroll their children in a private school. But it doesn’t mean that the quality is good,” one private school teacher said. He explains that because private schools must maintain prestigious appearances, teachers often inflate grades and make easy exams.

According to the 2013 World Economic Forum (WEF) Global Competitiveness Report, Egypt had the lowest quality of primary education out of all 148 countries surveyed. The 2014 report showed that Egypt moved up three places in rank, a slight improvement.

But has the education system in Egypt always been this bad?

“The situation is so much worse now. I used to go to a public middle school, a public high school, and a public university. It wasn’t like that 10 years ago,” Mostafa Wafa, a recent Cairo University graduate explained.

The initiative provides well-trained teachers to fill in the gaps left by the public school system. For some students, Wafa notes, simply learning to read and write is an accomplishment.

Programs like Mish Madrasa offer a glimmer of hope in areas where government-supported schools have failed. While President Sisi’s administration has acknowledged the need for educational reform, it has implemented minimal concrete measures to date.

Last August, the new Education Minister Mahmoud Abou el-Nasr announced a complete revisal of the school curriculum. It also pledged to hire 30,000 better-qualified teachers and to raise teacher salaries by $140 per month. As of yet little has been done, but many hope that the reforms created in partnership with the European Union will eventually help mend a broken Egyptian education system.