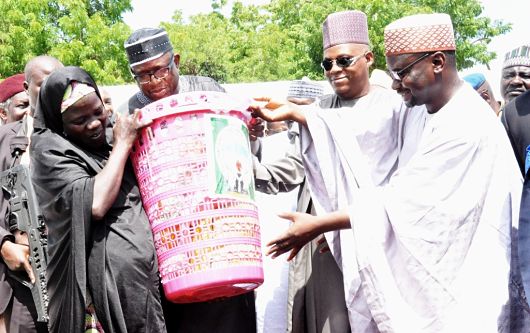 Nigeria’s National Emergency Management Agency (NEMA), issued 410 delivery kits to internally displaced pregnant women housed at camps in Maiduguri, Borno State. Among the delivery kits were a wax print and infant feeding bottles along with a mattress, a blanket and a net for the expected newborns.

The kits also included a baby bag, diapers, a basket, a towel, baby soap, and supplements for the mother such as milk and cocoa drink. The supplies come at a vital time since some of these women are due to give birth in late August or September.

The north-eastern Nigerian Borno State has been the worst affected in the conflict against the Boko Haram insurgency which began in 2009. Sani-Sidi, NEMA’s director general, says insurgent attacks have displaced many people, leading to the creation of 23 IDP camps in Borno State.

“In all the camps in the state, 60 percent of the IDPs are women and children classified as vulnerable and needing more support,” he said. “As a result, 410 pregnant women were selected [to receive delivery kits] out of 1,980 identified pregnant women in 13 female IDP camps in Maiduguri.”

During this donation, UNFPA’s Ratidzai Ndhlovu underlined an expected high in births among Nigerian IDPs, stating that there would be an expected 60,000 births by the end of 2015.

According to UNICEF, a Nigerian woman’s chances of death during pregnancy and childbirth are 1 in 13. Additionally, newborn Nigerian mortalities, which occur among the first week of life, make up about one-fourth of total deaths of children under five years of age.

A majority of these deaths arise from complications during birthing or pregnancy, which serves to highlight the importance of maternal and newborn health care access, especially within vulnerable and displaced populations.