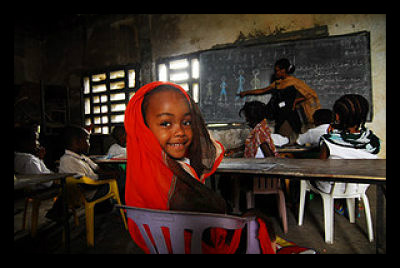 Known as one of the poorest countries in the world, Comoros, an archipelago in the western Indian Ocean, has struggled to get children enrolled in schools. Education in Comoros is mandatory between the ages of six and 16, yet a large portion of the population still receives little to no education at all. Primary school lasts for six years, followed by seven years of secondary school. However, given that the country only has one university, most students seek higher education abroad.

Comorans attain an average of 2.85 years of schooling, leading to an adult literacy rate of around 75 percent. While under French rule from 1843 to 1975, Comoros based its education system after that of France. Today, the education system is composed of the formal school, taught mainly in French, and the Koranic school, due to the vast majority of Comorans being Sunni Muslims. Often as a result of financial issues, many families opt to send their children to Koranic schools, where students can receive an Islamic education for free.

Despite the school options available, enrollment rates have been on the decline, with schools being affected by political instability and unrest from teacher strikes and student protests. After the country gained independence, a large number of French teachers were let go, causing the system to be plagued by poor teacher training and even poorer results.

To cope with the constraints of the education system, the Education Sector Support Program in Comoros (PASEC) was implemented during the 2005-2010 period in collaboration with the European Union. In spite of that, it was not until recently that the country started seeing results.

Around 320 primary and secondary schools were refurnished and remodeled, while training was provided to school directors, education inspectors and teachers. Around $16.5 million has gone into PASEC and has assisted Comoros in achieving the Millennium Development Goals. With such assistance, net access to primary education has increased by six percent over the span of seven years and the gap between boys and girls enrolled in schools is steadily decreasing.