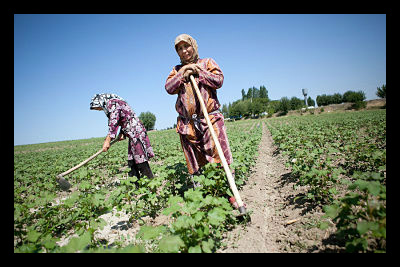 This year, the Global Hunger Index (GHI) ranks Uzbekistan at 5.7 percent for its undernourished population from 2011 to 2013.

More than 800 million people suffer from hunger and the GHI examines 120 of the low-income countries that account for the vast majority of global undernourishment.

In the last 14 years, Uzbekistan has shown a steady improvement in eradicating hunger, with a decline from 3.6 million to 1.7 million of the country’s population facing food insecurity.

However, the country is still in need of renewed political commitment to achieving food security in order to continue making progress against hunger, which not only stunts physical, intellectual and even economic growth but can also lead to death.

Yuriko Shoji, the recently appointed Food and Agriculture Organization (FAO) Sub-regional Coordinator for Central Asia and country representative for Uzbekistan, spoke on the topic at a launch event at Tashkent State Agrarian University.

“Despite good progress made in the past two decades and an increasingly favorable environment, the full potential of agriculture – and food security for everyone – have yet to be achieved,” said Shoji. “With renewed political commitment, and good practice that can be shared with the world, food security of each and every household is within reach.”

Shoji highlighted the key requirements for overcoming the limitations to prioritize food security and nutrition issues. The event served as a platform for discussing global hunger and malnutrition.

Uzbekistan’s positive trend to combat malnutrition serves Millennium Development Goal (MDG) 1 of halving the proportion of undernourished people by next year. It’s a goal that is within reach if Uzbekistan and other developing countries continue making political efforts toward food security.

According to the FAO, 63 developing countries have reached the MDG target and six more are on track to reach it by 2015.

Though Uzbekistan has seen significant progress in hunger, the country must continue to set the path for others that remain chronically undernourished in order to meet next year’s MDG target.