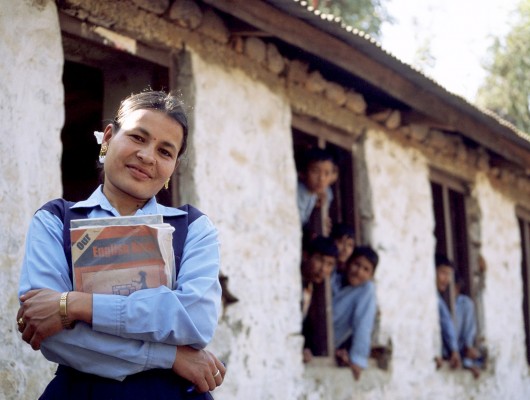 Educating women is a powerful weapon in fighting global poverty. But those living in developing countries may not reach their full potential because they often do not receive a proper education.

Currently, females are underrepresented both in school enrollment and attendance in developing countries.

According to the book “Deprived Devis: Women’s Unequal Status in Society,” “The evidence is overwhelming that education improves health and productivity and that the poorest people gain most. When schools open their doors wider to girls and women, the benefits multiply.”

There are several indicators that reveal important patterns and trends in women’s education in developing countries, such as measures of literacy, enrollment status and years spent in school. The World Bank says, “Each of these indicators leads to the same conclusions: the level of female education is low in the poorest countries, with just a handful of exceptions, and by any measure, the gender gap is the largest in these countries.”

Literacy Rates
Literacy is one of the dominant objectives of education around the world. The ability to read and write is a human right; nonetheless, the literacy rates remain low among women, especially in developing countries.

Primary School Enrollment
UNICEF says that low adult literacy rates are a result of past under-investment in the education of women, specifically referring to primary school.

Dropout Rates and Years of Schooling
According to the World Bank, “Gross enrollment rates, which are usually reported for all primary and secondary classes, tend to mask some other important measures of educational progress. These include how many of the students remain in school, how many are promoted to the next grade, and how many complete each cycle.”

Secondary School Enrollment
Female enrollment at the secondary level has remained low in the developing world. Many women drop out during primary school or do not have access to the resources they need in order to attend secondary school.

Teachers Training
The lack of access to education in developing countries can also be blamed on the decline in teacher training. This diminution is due to the shortage of teachers in low-income countries. There are not enough resources to train individuals for this role.

Poverty
Poverty is also considered a major contributor. “If a family has limited funds and has to be selective on whom to send to school, more often than not, it is going to be the men,” according to UNICEF.

Cultural Practices
The machismo ideology still prevails in some developing countries — and adverse cultural practices also contribute to the lack of access to education. Females are more likely to stay home and learn how to be housewives and mothers.

Recently, a UNICEF spokesperson emphasized that “females are often shackled by gender roles and outdated traditions, with male privilege and entitlement ensuring that when educational opportunities are limited, men will take available classroom space. Gender roles and traditions that keep girls from school contribute an additional barrier to universal education: illiterate mothers.”

The speaker also added that UNICEF ensures children have access to a rights-based, quality education that is rooted in gender equality because it creates a ripple effect of opportunity that impacts future generations.

The United Nations identified the importance of universal education during the establishment of the Millennium Development Goals (MDGs). In order to meet the goals, the World Bank said that “developing countries need to focus more on improving female enrollment and attendance of secondary and tertiary education as well as continuing efforts to improve women’s access to primary education.”

The U.N. recognizes three social benefits of providing females with education: better health care for women and their families, better maternal and infant health and outcomes, and finally, access to better jobs that help families and countries prosper. UNICEF adds that “All of these occurrences are imperative to global development, and they can be accomplished by educating females in developing countries.”