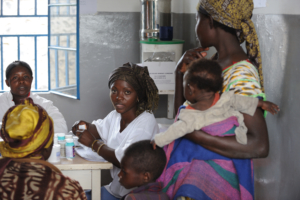 Imagine traveling 1,316 kilometers from the Democratic Republic of the Congo (DRC) to Uganda seeking medical help for your nine-year-old daughter who seems to have been infected with the Ebola Virus Disease (EVD).

On August 29, 2019, a nine-year-old girl from the DRC was exposed and later developed symptoms of this rare and fatal disease. She was identified at the Mpondwe-Kasindi border point and then sent to an Ebola Treatment Centre (ETC) in Bwera, Uganda. Sadly, not too long after her arrival, the child passed away.

This sporadic epidemic has come back yet again and bigger than last time. This disease has infected the North Kivu Province and has caused more than 2,200 cases, along with 1,500 deaths just this year. Thus, making this the second-largest outbreak in history following behind the 2014-2016 outbreak that killed about 11,000 people. As of September 4, 2019, a total of 3,054 Ebola Virus Disease cases were reported. Out of that total number of cases, 2,945 of them were confirmed reports and the rest of the 109 were probable cases. Overall, 2,052 of those people died.

This disease has had a total of 25 outbreaks since its first flare-up in the Ebola River in 1967. It has plagued countries spanning from the West to sub-Saharan Africa and has a 25 to 90 percent fatality rate. Even though reports are coming from 29 different health zones, the majority of these cases are coming from the health zones of Beni, Kalunguta, Manima and Mambasa. About 17 of these 29 health zones have reported new cases stating that 58 percent of probable and confirmed cases are female (1,772), 28 percent are children under the age of 18 (865) and 5 percent (156) are health workers.

This 2019 case is different because of the way that Ebola Virus Disease is affecting an area of the country that is undergoing conflict and receiving an influx of immigrants. The nation’s “political instability,” random acts of violence and “limited infrastructure” also contribute to the restricted efforts to end the outbreak.  As of June 2019, the disease started its expansion to Uganda, with four cases confirmed near the eastern border shared with DRC, South Kivu Province and Rwanda borders. The World Health Organization (WHO) Country Representative of Uganda, Yonas Tegegn, stated that whoever came into contact with the nine-year-old patient had to be vaccinated.

Out of the five Congolese who had contact with the little girl, four of them have been sent back to their country for “proper follow-ups.” Another 8,000 people were vaccinated against Ebola due to “high-risk areas in the country.”  Overall, 200,000 people in DRC have been vaccinated against EVD along with “health workers in surrounding countries.” With this being said, there is no official vaccination that is known to effectively protect people from this disease. Therefore an “effective experimental vaccine” has been found suitable enough for use. Also, a therapeutic treatment has shown “great effectiveness” in the early stages of the virus.

Ugandan authorities have taken matters into their own hands, strengthened border controls and banned public gatherings in areas that have been affected by EVD. According to the August 5, 2019 risk assessment, the national and regional levels are at higher risk of contracting EVD while the global level risk is low.

The World Health Organization (WHO) is doing everything they can to prevent the international spread of this disease. They have implemented the International Health Regulations (2005) to “prevent, protect against, control and provide international responses” to the spread of EVD.

This operational concept includes “specific procedures for disease surveillance,” notifying and reporting public health events and risks to other WHO countries, fast risk assessments, acting as a determinant as to whether or not an event is considered to be a public health emergency and coordinating international responses.

WHO also partnered up with the Global Outbreak Alert and Response Network (GOARN) to ensure that proper “technical expertise” and skills are on the ground helping people that need it most. GOARN is a group of institutions and networks that use human and technical resources to “constantly alert” one another to rapidly identify, confirm and respond to “outbreaks of international importance.”  WHO and GOARN have responded to over 50 events around the world with 400 specialists “providing field support” to 40 countries.