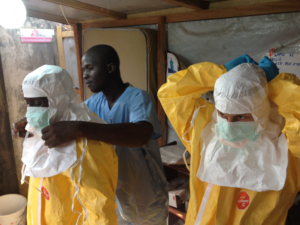 In August 2018, the World Health Organization confirmed an Ebola virus outbreak in the Democratic Republic of the Congo. Since then, the Rwandan government has taken a proactive stance with a rigorous system to promote Ebola prevention in Rwanda. So far, the system has been successful. Despite constant traffic across the borders between the DRC and Rwanda, there have been no cases of Ebola in Rwanda.

Threat of Transmission from the DRC

Since the outbreak of Ebola in the DRC, there have been more than 2,600 confirmed cases of the virus and 1,800 deaths. According to the WHO, the DRC Ebola outbreak is one of the worst outbreaks in history, second only to the 2014 West Africa Ebola epidemic. The WHO recently designated the outbreak as a global health emergency. With approximately 12 cases of Ebola arising every day in the DRC, the threat of transmission to other countries is still high, especially Rwanda. Since the Ebola threat is just across their border, Rwanda’s government has been proactive in preventing it.

Strategies for Ebola Prevention in Rwanda

In addition to all these measures, health officials check for Ebola symptoms at points of entry to Rwanda. Officials check travelers’ temperatures and make them wash their hands, while Ebola awareness messages play in the background. So far, these measures have kept Ebola out of Rwanda. Even so, the threat of Ebola spreading to Rwanda remains critical.

In early August 2019, Rwanda briefly closed its borders, after the third confirmed Ebola death in the Congolese border city of Goma. According to a joint statement from the WHO and the United Nations, the latest case of Ebola in the highly populated, border city of Goma increases the risk of the virus spreading to other countries.

As WHO Director-General, Dr. Tedros Adhanom Ghebreyesus noted, “Rwanda has made a significant investment in Ebola preparedness.” These investments and prevention strategies have stopped the spread of Ebola into Rwanda thus far. However, the threat of Ebola transmission will remain significant, until the outbreak is controlled in the DRC. Therefore, it is crucial that the Rwandan government, as well as health organizations worldwide, keep encouraging Ebola prevention in Rwanda.