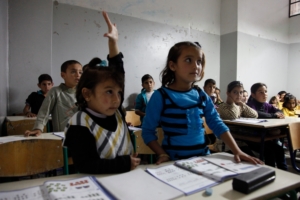 “Language is what ties us all together in our cultures, in our own countries. Being able to communicate is a vital part of the human experience.” – Photojournalist Justin Merriman

Duolingo is a popular language-learning platform available on desktop and mobile phones serving to boost the language skills of people around the world. Known for its iconic green owl mascot, Duolingo offers free courses in 38 different languages. These include widely spoken languages like English and Spanish, as well as endangered languages such as Navajo and Hawaiian. It even offers courses in fictional languages like Klingon from Star Trek and High Valyrian from Game of Thrones.

While not specifically an original intent of the platform, Duolingo has grown in popularity among immigrants and refugees who seek to learn the language of their new homes. Recently, the company even made a documentary film about how Duolingo helps refugees.

The Importance of Communication

The United Nations High Commissioner for Refugees (UNHCR) estimates that there were 79.5 million forcibly displaced people worldwide at the end of 2019. Among the world’s displaced people, 20 million are refugees or asylum-seekers who have crossed borders into another country. Most refugees come from Syria, who have seen 6.6 million displaced people.

Language is extremely important to everyday life. In unfamiliar situations, language can act as a barrier to interactions and opportunities among those who can’t understand each other. For impoverished refugees, learning the local language is both vital and extremely challenging. The resources refugees need to learn a new language are often unavailable or not easily accessible.

Duolingo helps refugees by making language learning accessible and convenient. Available to anyone with access to an electronic device, the learning platform teaches basic conversational skills in a fun and easy way. It teaches reading, writing, listening and speaking through conversational situations where users simultaneously learn vocabulary and grammar. After receiving thousands of thank you letters from global users who benefitted from the app, Duolingo decided to create a documentary film following real refugee users as they learned new languages and navigated their new environments.

“Something Like Home” highlights the stories of four refugees. Photojournalist Justin Merriman went to Turkey and Jordan to interview these refugees and create the film, which is available for free on Youtube or at duolingomovie.com. Merriman states that “It wasn’t really, in the beginning, about Syria and displaced refugees. It was about people using language to change their lives.”

One of the featured refugees, Noor, is a Syrian refugee who fled to Iraq, Dubai and finally to Turkey. Noor was the only refugee from the film able to attend its premiere at the Kelly-Strayhorn Theater in Pittsburgh, as her Iraqi citizenship allowed her to obtain a travel visa over the others who are Syrian citizens. She now works as a computer programmer and software engineer in Turkey, speaking five languages.

Another featured refugee, Ahmed, also fled Syria for Turkey where he now works as an engineer overseeing water and sanitation programs for internally displaced Syrians. Ahmed, formerly an engineer in Syria, was only able to find employment in Turkey after using Duolingo to learn the language and communicate his skills to employers. He is a prime example of how Duolingo helps refugees in these critical situations

Noor and Ahmed are just two examples of the global refugee experience—being violently torn from normal life and forced to start over somewhere completely unfamiliar. Duolingo helps refugees by freely offering an opportunity to make the transition into their new lives easier.