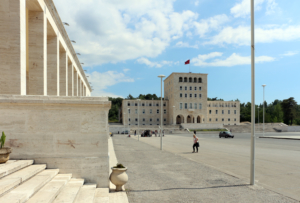 Albania became highly secluded following Enver Hoxha’s communist reign from 1908-1985. Medical staff would often make house calls for patients that were severely ill because there was only one hospital per city. The paucity of the country’s healthcare offset the highly skilled and thoroughly trained professors at the Mother of Teresa School of Medicine. This school emerged in 1959 and was the first school of medicine in Tirana. The doctors had the skill, but they lacked the proper tools to go about daily operations. The lack of resources during this time had a damaging effect on healthcare in Albania.

While professors who were to teach at the Mother of Teresa School of Medicine received training in other European countries, Albania still gave little to no personal freedom regarding matters of end-of-life to its patients. Documentations have determined that the nutrition of Albania became scarce under Hoxha’s rule. In fact, infant mortality rates supposedly increased; they are currently at 10.83 per 1,000 births (9.49 for females per 1,000 and 12.08 for males per 1,000). While the population began to dwindle, the communist regime led a movement in which women received the promise of a cow in addition to the title of “heroic mother” if they had six or more children.

Birthing units would hold five to seven pregnant patients per room: no husbands or other family members could fit or enter. Albania currently meets compliance with global labor standards regarding maternity protection. Mothers in the country can enjoy the benefits of a full maternity leave duration, full amounts of maternity leave cash benefits and breastfeeding breaks with breastfeeding facilities. The country also established that the government was the source of the cash benefits and not individual employers.

Not only could “heroic mothers” not have their husbands or other family members around as they gave birth, but Albanians are still unable to deny poor medical treatment from hospital doctors and medical staff. The coverage for healthcare in Albania for citizens during communism mimicked the Soviet-type Semashko model and was free of charge. The Albanian government owned and directed the healthcare plan.

Today a combination of healthcare contributions from the state, employees and employers pay for Albanian public healthcare spending. In fact, the employer and employee each contribute 3.4% with employees’ portion coming from their salaries. The state subsidizes and pays for the rest. The fact that Albanian healthcare does not address the withdrawal of treatment gives Albanians little power to make healthcare decisions.

Despite Albanians’ lack of healthcare freedom, the country is doing much to raise the quality of healthcare in Albania. The World Health Organization (WHO) mentioned the 2013-2022 Albanian Plan for Mental Health Services Development. The WHO highlighted the plan to protect the rights of individuals with special needs and mental health problems. The 11th National Report on the Implementation of the European Social Charter for Albania stated that as a part of its 2013-2022 plan, it built nine community mental health centers and 13 supported homes.

The idea behind supported homes is to deinstitutionalize psychiatric wards with high populations and transition these patients back into society. The method before this was to simply hospitalize mentally ill citizens. Albania is also home to Different and Equal, an NGO that assists victims of human trafficking, domestic violence and sexual abuse.

Albania is not only developing mental health centers or supported homes; the government has also promised to revolutionize and increase financial output towards the health sector. The government believes that the need for medical devices will increase. Increased spending will lead to new technology in hospitals. It also maintains the idea that increased spending on the health of its country will cause investments in public hospitals to rise. According to the Albanian Ministry of Health (MoH), public healthcare spending in 2018 reached 48.6 billion Leke ($450 million). Expectations determine that more recent spending statistics should be higher than reports state.

In 2018, the WHO reported that during visits, its team noticed that the healthcare buildings were old but that they had received good maintenance. Also, the MoH developed a general medical check-up for everyone between the ages of 40-65 in 2016. The idea behind this check-up was that it would give individuals the motivation to visit their family physician. Albanians enjoyed this innovative solution to healthcare advocacy for free.

The Albanian government has chosen a route of seclusion in the past. Communism allowed citizens to have free healthcare but at the cost of the freedom to choose the right health options for themselves. The citizens of Albania are now helping to fund their own healthcare. Nurturing mothers have become a larger focus, which will hopefully lower the infant mortality rate. Albania is also addressing mental illness and future government healthcare spending is set to increase.

How Duolingo Helps RefugeesLearn About Poverty in Chad
Scroll to top