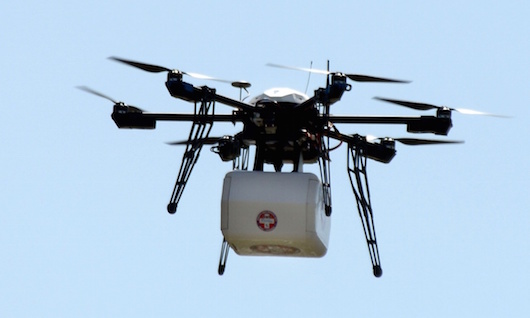 While Americans may enjoy the entertainment of recreational drones, in South Africa the devices serve an alternative purpose. Barry Mendelow, Professor Emeritus at the University of Witwatersrand, Johannesburg, South Africa, has developed drones into what could be a life-saving delivery service.

e-Juba would provide remote areas with essential medical supplies, including vaccines and pharmaceuticals.

The drones are not only designed for one-way deliveries but also allow users to send their own blood and DNA samples to labs for testing.

With this system, disease detection and diagnosis could take as little as a day. Without the drone delivery service, says Mendelow, current disease diagnosis takes up to six weeks. During this period, a patient’s condition could worsen or a contagious disease could be spread to others unknowingly.

This large window of time is due in large part to a general lack of infrastructure in rural areas. Unpaved roads, according to Mendelow, pose a significant challenge to patients that have to make their way from remote areas to labs for testing. E-Juba serves as a simple and convenient solution to the infrastructural obstacle.

Trials that Mendelow conducted demonstrated a high possibility for the drones’ success. 300 flights, each traveling about 30 kilometers, did not lose “a single cargo or artifact.”

The drones may prove especially beneficial to revolutionizing healthcare in South Africa, a country that the World Health Organization deems as having one of the “highest burdens” globally for Tuberculosis (TB) and HIV.

Mendelow’s project is close to coming to fruition. With the trials successfully conducted, all that he now requires is clearance by the South African Civil Aviation Authority to implement e-Juba as an authorized delivery system.