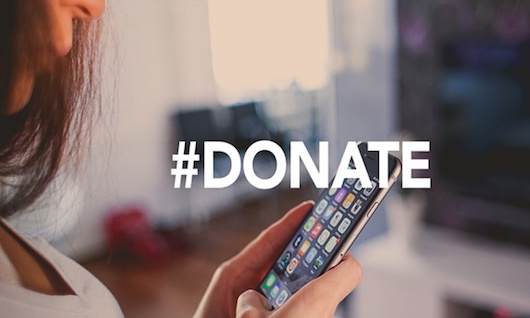 #Donate: If the single most characteristic feature of the 21st century was chosen, social media would definitely be among the forerunners for the title. In the past decade especially, the advent of social media has taken over our lives. From MySpace to Facebook, Twitter, Instagram et cetera, the world of social media has become grown exceptionally.

The takeover by social networking sites and apps is generally taken in a negative context. There is always a never-ending stream of criticisms directed at the virtual world. The critics often propagate the notion of social media desensitizing people to the real world problems. These arguments, while not entirely untrue, completely disregard social media’s potential for positive impact, if used wisely.

Recently, the ALS Ice Bucket Challenge campaign received much media frenzy. It was also successful in raising awareness as well as donations for its cause. The “tagging” process, such as #Donate, through social media websites led to a massive campaign, which also involved many celebrities.

Popular Facebook page “Humans of New York” managed to raise $1.2 million in a campaign for an inner-city school. The catalyst-a viral photograph of an inspiring middle school boy.

A photograph of a Filipino boy doing his homework under the light of a McDonald’s restaurant posted on Facebook went viral, as it was shared almost 7,000 times. The significant number of people interested in contributing to the boy’s education led to the establishment of an online fundraising campaign. The campaign generated enough funds to cover nine-year old Daniel up till college.

These stories, and many more like these, establish the significance of social media in modern world activism. The creation of social media websites has enabled an unprecedented platform to create awareness for the issues in the world. Pages like GoFundMe or Network For Good allow for anyone and everyone to start fundraising campaigns for a cause they hold near and dear.

In the fast world of social media however, fundraising can sometimes become a challenge as well. The campaigns like the ALS fundraiser require the donor to go to a separate website and then donate. As easy as it is to type a web address and make a few simple clicks, it is still somewhat of a hassle for social media users. Mostly attuned to “liking” or commenting on statuses, the process of redirecting to other websites can be annoying for the users.

This has given rise to “slacktivism”—where “activists” on social networking websites become slackers in actual donation process. In the ALS campaign, for example, the donors were far outnumbered by the people who shared the videos.

To assist the users in donating quickly and efficiently, a Washington DC-based startup Good World has come up with an innovative idea. They partner with a network of nonprofit charities. Users need a one-time signup for Good World to contribute to any charity of their choice within their network. To donate, the users simply need a hashtag of donation and their choice of amount of contribution typed into the comments section.

The system of commenting also simplifies the process of further promoting the campaign. Instead of having to “share” their donation through separate websites, the comment can be directly viewed by the user’s friends. This also gives them a faster way to make a contribution by simply commenting on the thread. The web service also forwards tax-deductible receipts to the registered email address.

The service has certain caveats: almost five percent of the donated amount is automatically deducted to fund the technology itself. There is also a 2.2 percent processing fee associated with the service. The additional charges may serve to distance some users.

In spite of the challenges, Good World is a valuable innovation in ensuring our technology remains up to speed with our generosity.