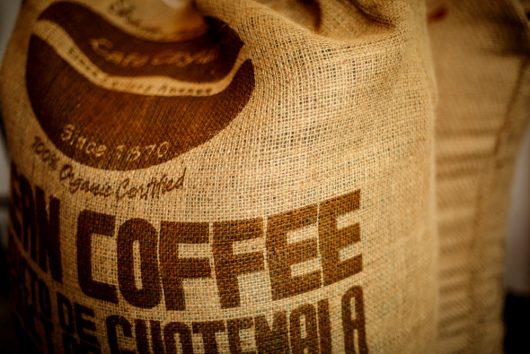 After oil, coffee is the second most traded commodity in the world. Although the coffee industry generates profits of over 60 billion dollars annually, it is estimated that less than 10 percent of those earnings end up in the countries where coffee is produced. Slightly less than 0.5 percent of the total earnings translate into wages for those who labor to produce coffee.

Thus, in a country such as Guatemala, where coffee is the nation’s largest export, extreme poverty and malnutrition are pervasive for a significant portion of the population.

According to USAID reports, an estimated 56 percent of the Guatemalan population lives in poverty, and around 20 percent live in extreme poverty. High poverty rates render infants and children especially vulnerable: infant mortality is among the worst in the region (39 per 1,000 live births), and maternal mortality is extremely high (153 per 100,000 births). Although statistics vary, it has been reported that 85 percent of children under five are malnourished in Guatemala.

Although the Guatemalan government mandated a legal daily rural minimum wage of $2.488, a rapid decrease in the global price of coffee has depressed laborers’ already low wages. The average daily wage for laborers in the coffee industry has fallen from around $3 a day to the current average of just $2 a day.

Experts highlight two primary catalysts to the drop in global coffee prices over the past decade.

In the 1990s, large American corporations such as Nescafé and Maxwell House began to adopt neoliberal economic policies that favored the abandonment of previous agreements with coffee growers that provided for protections against price variation. These agreements, which had maintained coffee prices within predetermined margins regardless of variable harvest qualities, were seen as contradictory to the values of “free trade”.

Then, when Vietnam was introduced to the market as a new, rapidly producing coffee country after the World Bank made significant contributions to the industry through loans, the flood of additional coffee crops caused the bottom to drop out of the market. Per the dictates of the economic principles of supply and demand, the sudden and significant increase in coffee commodity supply once Vietnam entered the market caused prices to plummet.

In addition to market destabilization, discrimination against rural workers, many of whom are of Mayan ancestry and are non-Spanish speakers, as well as the lack of workers’ rights have been identified as causative factors in the economic hardship experienced by most coffee industry laborers in Guatemala.

Many plantation owners hire temporary workers as a means of keeping wages low, avoiding paying any types of benefits and preventing worker organization. Coffee industry laborers don’t complain as they may lose the opportunity for any work at all.

Numerous international organizations have recognized the need for change in the Guatemalan coffee industry. The following are five development projects in Guatemala that have been implemented with the intent to support and advocate for the rights and livelihoods of coffee industry laborers.

These development projects in Guatemala are each doing a small part to address the serious issues facing the coffee industry and ensure future prosperity for the nation and its producers.