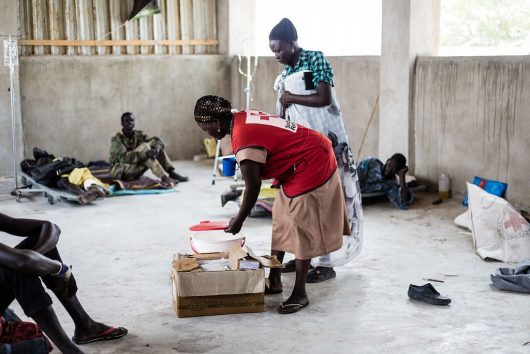 Clearly, the South Sudanese civil war has caused a great deal of suffering. Generally, though, large news agencies provide less airtime to cover the good and instances of perseverance that exist in the face of this struggle. Without paying close scrutiny to such hope-filled details, it’s not difficult to see how the media misrepresents South Sudan. It’s difficult to realize that amongst the seemingly endless stories of pain there are moments of hope. Here are a few examples.

In the winter of 2018, the South Sudan Football Association (SSFA) held a youth tournament in Juba, a major South Sudanese city. The event took place over the course of series of days, one of which was national Unity Day — a South Sudanese holiday dedicated to the promotion of togetherness in the country.

Maria Dudi, the minister of sport in South Sudan, had high hopes for the event, saying “The main objective of National Unity Day is to promote the integration of diverse populations through sports of fair play and sportsmanship.” The event was supported by Japanese International Cooperation Agency, a branch of the Japanese government dedicated to developmental assistance in struggling countries.

On May 18, the Facebook page for the SSFA posted regarding intensified efforts to train a new cadre of young referees so that they are capable of operating on the world stage. These efforts, alongside youth tournaments, indicate a renewed hopefulness that South Sudan’s passion for soccer can be used as a vehicle for cooperation and global recognition.

South Sudan currently faces tremendous economic challenges that are only compounded by the presence of guerrilla warfare throughout the country. Despite this, South Sudan possesses significant potential for economic development due to its abundance of natural resources.

South Sudan houses large oil reserves and vast resource-rich forests. This abundance of resources further highlights how the media misrepresents South Sudan — it’s uncommon for large-scale news agencies to remind their audiences of the economic potential of a nation supposedly destitute and wartorn.

At present, foreign involvement in South Sudan primarily focuses on humanitarian aid rather than investment, as immediate civilian welfare is the highest priority. With the help of the U.N., and the stability provided by eventual peace conferences, South Sudan has the resources to garner the attention of foreign investment, which in turn could slowly bolster its economy.

A variety of major players in the African world have stepped in to contribute to South Sudanese peace efforts. Kenyan politician Raila Odinga has offered to mediate and broker peace talks between South Sudan’s rival constituents, with the aid of the Intergovernmental Authority on Development (IGAD). Odinga has plans to meet separately with each constituent prior to any official peace conference. South Sudanese president Salva Kiir has been openly receptive to the notion of a peace conference with his rebel rival, Dr. Riek Machar.

Additionally, the U.N. has entered the fray and imposed a June 30th deadline for the talks. Another deadline looms ahead on July 1, which is the African Union Summit slated to be held in Mauritania. While the past few years have housed a number of recent failed South Sudanese peace talks, these recent events hold a renewed sense of positive momentum and hope for the future.