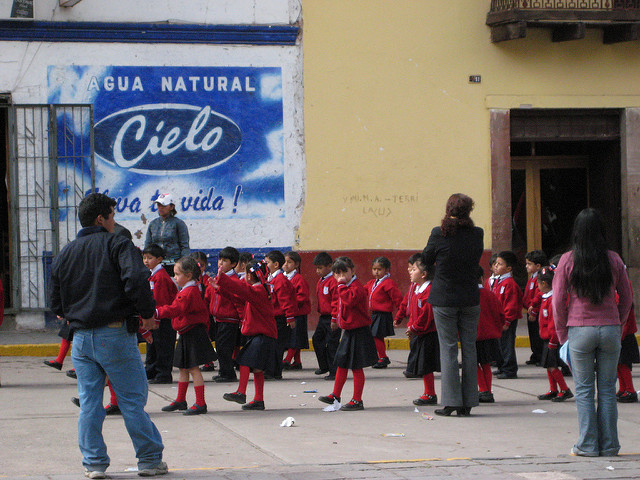 Girls’ education in Peru varies based on geography. In rural communities often located in mountainous regions, only 36 percent of girls are able to finish secondary school education.

Corruption still plagues the country and many of the government sectors are still underdeveloped — as evident when exploring the gap in the education system. However, Peru experienced an economic boom in the past several years. Between 2002 and 2013, the annual average growth rate was 6.1 percent. This growth is due to the nation’s rich abundance of mineral resources, as well as structural reforms that allow for the implementation of infrastructure and programs that counter this issue.

The Inter Press Service (IPS) news agency conducted a study comparing rural to urban education attendance rates. The study found that 83.7 percent of 12 to 16-year-olds attended schools in urban areas compared to the 66.4 percent of the same age group in rural areas.

The Peruvian poverty rate pushes parents to allow only one child to continue an education, which leads to an emphasis placed on male education. Statistics show that only 43 percent of rural women complete secondary school, compared to 58 percent of men. This can be attributed to the fact that many girls are expected to balance a life between work, school and domestic chores, which often inhibits the opportunities for an equal education. It is common to encourage work over education, and an estimated 34 percent of children in Peru work in order to help their families. Often their jobs are arduous, and children are rarely adequately paid.

Girls’ education in Peru can often be hindered by family commitments. However, an important contributor to the percentage of female school dropouts is the location of most secondary schools, which are usually found in more urban areas. Long walks to school often reduce the time a girl has to help out in the home and study.

In Peru, 21.7 percent of the population live in poverty. In rural areas, 13 percent of people live in extreme poverty, surviving on an average of $56 per day. This creates a tough environment for the continuation of girls’ education in Peru.

Over the past several years, programs such as Peruvian Hearts have been set up to ensure girls access to an education beyond elementary school. One such initiative provides scholarships, room and board for secondary school as well as college tuition.

Girls are chosen based on their academic strength, drive and financial need. The organization emphasizes the necessity for family support and ensures each girl’s family commits to that support.

Peruvian Hearts has a 100 percent success rate with its students, and students are found more likely to continue their education with the continuous help of this organization. Such support empowers and provides opportunities for girls who might otherwise lack the resources to do so themselves, while also simultaneously aiding the reduction of poverty in Peru.

Girls will usually spend the week at school, and if possible, return home at the weekends. The Sacred Valley Project has saved an average of four hours of walking, per day, for each of its 22 students.

Despite certain setbacks, the government of Peru has made strides in the education system. Between 2002-2015, the deficit of schools in rural areas of Peru decreased from 515 to 69 thanks to the Peruvian Ministry of Education. Since 2011, the government’s education budget increased by 88 percent, and its initiative ensured the building of further infrastructure in such rural locations and improving teaching as an industry.

These new priorities are shown in Peru’s staggering progress, and ensures girls access to an education in the future as well. Organizations such as Peruvian Hearts and The Sacred Valley Project are spearheading the rise in education rates, especially for girls in rural communities.

This, paired with the economic boom of Peru and the improvement of their infrastructure, is radically changing the education sector. It is creating an environment where girls have more access to an education, especially in rural areas.

Details Matter: How the Media Misrepresents South Sudan10 Important and Relevant Facts About Poverty in Santiago
Scroll to top