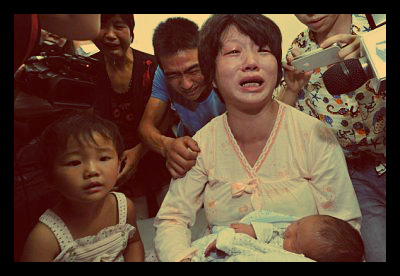 While technology provides many benefits to an ever-globalizing world, it also has several down falls. With technology comes the digital marketplace, including online black markets. Throughout China and the world, traffickers, doctors and parents are using the Internet to sell children and babies for cash.

A young couple from southern China was arrested last week for posting their baby for sale online, International Business Times (IBT) reports.  This child was priced at 40,000 Yuan, about $6,500 USD. A child trafficking activist who –pretending to be an interest buyer – intercepted the advertisement, alerted authorities and met the father at a nearby hospital where he was then arrested. The parents claimed they intended to put the child up for adoption, but were unaware of the proper procedures.

A similar incidence occurred a month earlier. Another couple sold their daughter for 50,000 Yuan via an online auction. The couple then used the money to purchase material items such as shoes and Apple products. According to the Telegraph, the parents expressed that selling the child was in the child’s own interests: “We did not give the baby away for money but to give [the baby] more security.”

Doctors have also been caught selling newborn children, though these transactions are not necessarily online. Just recently, an obstetrician from Fuping was arrested for selling a newborn child to traffickers after convincing the mother that the baby was too ill to survive. Under these false pretenses, the mother willingly gave the child over to the hospital. Shortly after, the mother changed her mind, demanded the baby back and called the police. According to the Daily Mail Online, police are investigating at least seven similar cases in the region.

Online trafficking represents the newest phase of a longstanding problem in China. Child trafficking rings have been operating for years, generating outlandish profits. In August, authorities broke up a major trafficking network spanning more than four Chinese provinces and trafficking ten children annually, says IBT. The willingness of parents to sell their children to traffickers stems from factors such as deep poverty and lack of education.