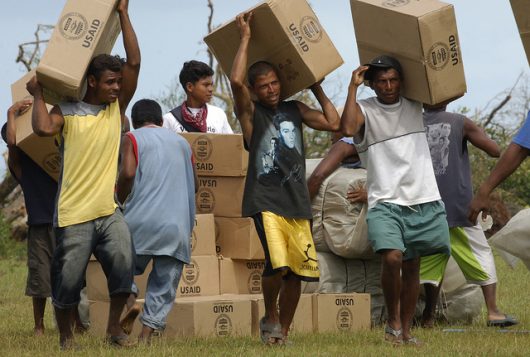 Foreign aid is a topic that stirs controversy, with each side maintaining significant weight in their argument.

“You know the excuses: We can’t afford foreign aid anymore, or we’re wasting money pouring it into these poor countries, or we can’t buy friends—other countries just take the money and dislike us for giving it. Well, all these excuses are just that, excuses—and they’re dead wrong,” Ronald Reagan said in 1987.

Foreign aid has been categorized as “soft power” since the late 1980s. “Soft power” is the ability of a country to persuade others to do what it wants without force or coercion. Joseph Nye coined the phrase, arguing that security relies on winning people as much as winning wars.

Since the 1980s, soft power has become central in U.S. foreign policy practices. Is foreign aid a tool in the soft power toolbox?

According to Phil Vernon, “currency of soft power is values, institutions, culture and policy, then soft power is exercised by the choices you make and the actions you take, not by what you say.” If this is true, aid should be accompanied by anti-corruption monitoring organizations, tools of economic sustainability and keys of independence. The goal is not to have a country depending on the United States, but to provide the tools for a state to become independent.

If the United States does not ensure and monitor the aid given, corruption will prevent the money from reaching the population in need. Monitoring programs are even more vital than aid itself. Corruption is the kryptonite to foreign aid.

According to the National Bureau of Economic Research, the more corrupt the government is, the more aid the state receives. There is no evidence that an increase in foreign aid reduces corruption.

Currently, corruption is not being punished. This lack of acknowledgment is only encouraging governments to abuse international funds. If corruption is reflected in next year’s funding, people will suffer. If the population suffers on the government’s behalf, this is motivation for the population to vote in order to correct the situation. Thus, reducing corruption will be imminent.

Despite the controversies and arguments surrounding international aid, it is important to remember that giving aid to corrupt governments is not giving aid to the people. Corrupt governments must be punished in some way in order to reduce international corruption. Corruption is the kryptonite to U.S. foreign policy success. U.S. interests must be maintained, and aid is a tool in the toolbox for doing just that.

How to Help People in Algeria: Three Key Organizations On the Micronesia Poverty Rate
Scroll to top