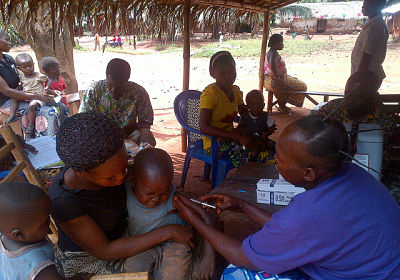 The Democratic Republic of the Congo (DRC) is a country located in Central Africa and has a population of 69.6 million people. With a GDP per capita of $753, the DRC is one of the poorest countries in the world. Half the country’s population lives below the poverty line, and most of the nation’s poor lives in rural areas, working as farmers and fishers. Common diseases in the Democratic Republic of the Congo are also a major plight.

From 1997 to 2003, the country was engulfed in a civil war, and other African countries also became involved. The war’s central cause was a desire for possession over the DRC’s mineral wealth, water and food. It also gravely damaged the DRC’s infrastructure. Today, there is still violence due to political instability, which makes it difficult for aid workers to access the area.

Additionally, a multitude of diseases devastates the nation. Common diseases in the Democratic Republic of the Congo include malaria, diarrheal diseases from lack of clean water, measles and cholera.

Both diarrhea and cholera in the DRC stem from a lack of adequate sanitation and safe water. In the DRC, less than 25% of people have access to clean water. Cholera outbreaks occur frequently.

The country has seen an epidemic of measles, as well, and NGOs like Médecins Sans Frontières, or Doctors Without Borders (MSF), have vaccinated millions of children. Malaria is yet another major problem and is the leading cause of death in the DRC.

Many NGOs have stepped in to help the Congolese. The area also suffers from a lack of hospital equipment and a shortage of staff. MSF has built treatment centers for cholera, and UNICEF has created the Healthy Villages program. This program aims to bring better sanitation and safe water to villages. Currently, 3,275 villages in the DRC are taking part in the Healthy Villages program.

MSF has addressed the problem of malaria by offering support to seven health centers with the aim of treating common diseases in the Democratic Republic of the Congo. The Center for Disease and Control (CDC) actively fights against malaria in the DRC under the U.S. President’s Malaria Initiative (PMI). It provides the Congolese people with long-lasting mosquito nets, prevents women from developing malaria while pregnant and improves the care of infected patients.