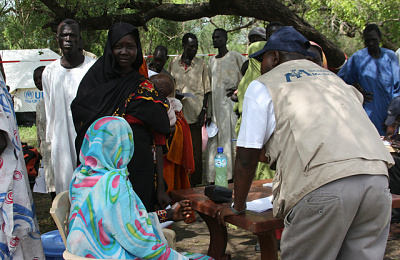 The people of South Sudan are currently dealing with a long list of hardships. In addition to living in a civil war, they also suffer from high rates of poverty. Due to the environment that they live in, the South Sudanese are victims to both violence and food shortage. Another complication is the threat of many different common diseases in South Sudan.

Visceral leishmaniasis, also called kala-azar, travels through a sandfly’s bite. The disease swells the spleen and liver, damaging the two organs. It is crucial to seek medical help as soon as possible because this disease can be fatal if not treated properly. In 2016, 42 individuals died from kala-azar, though that includes only reported deaths.

Measles is another of the more common diseases in South Sudan. In the first five months of this year, there have been 573 suspected cases. Measles is very contagious: a sick individual could spread the disease with a single cough.

The living conditions of the country mean these diseases leave a significant impact on the South Sudanese. Some areas in South Sudan are immune to visceral leishmaniasis. Unfortunately, their immunity is useless due to the amount of stress the South Sudanese live in. As a result, the disease continues to spread. According to the WHO, people are more vulnerable to diseases if they are placed in conflict situations.

Not only are many South Sudanese unable to afford food, but some also live in areas that are suffering from famine. Due to this food shortage, they are malnourished. The consequential lack of nutrients makes them even more susceptible to diseases.

With measles vaccination campaigns going around the country, there are several efforts to fight these common diseases in South Sudan. Groups such as the WHO are working toward providing the people of South Sudan the health care that they need.

A New Reality: The Progress of Education and Development in Ethiopia 6 Ways to Help People in Venezuela
Scroll to top