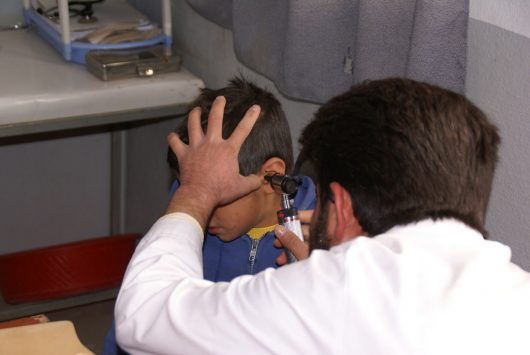 Afghanistan, or the Islamic Republic of Afghanistan, is a landlocked country located in South-Central Asia. With a total population of 32,527,000, Afghanistan is the 42nd most populous country in the world. Due to constant conflict, disease and other factors, the probability of dying between the ages of 15 and 60 years is 284 for every 1,000 people. Decades of war and neglect from international investors, the already struggling healthcare system has been left in tatters, allowing for the increase of both noncommunicable and communicable diseases in Afghanistan.

Noncommunicable diseases
One of the most common causes of death due to diseases in Afghanistan is noncommunicable diseases. Coronary heart disease, cancer, diabetes mellitus, chronic respiratory disease and stroke are some of the most common diseases in the country. Afghanistan is currently ranked at number one in the world for rheumatic heart disease deaths.

Hepatitis A and E
Both hepatitis A and hepatitis E are most commonly spread through food and water contaminated with fecal matter. They are both viral diseases that affect the functioning of the liver. Hepatitis A and E occur in areas with poor sanitation and can cause symptoms of fever, jaundice and diarrhea.

Bacteria and protozoal diarrhea
Bacterial agents such as E. coli, Campylobacter, shigella and salmonella are the most common causes of acute bacterial diarrhea. Amoebiasis infection rate has been estimated at three percent in the Afghan population. Giardiasis was discovered in up to 11% of surveyed children.

Cholera
Another major diarrheal disease in Afghanistan is cholera. Cholera is an acute illness that is caused by an infection of the intestine with the bacteria vibrio cholera. The infection is generally mild and without symptoms but can become severe. An estimated 1 in every 10 people infected with cholera will have severe symptoms including watery diarrhea, vomiting and leg cramps. The rapid loss of bodily fluids can lead to dehydration and shock, which could prove fatal without treatment.

Influenza and Pneumonia
Pneumonia is an infection affecting the nose, throat, airways and lungs. Pneumonia has 30 different attributing causes but is generally due to bacteria, mycoplasma, other infectious agents (such as fungi and parasites) and chemicals. A total of 12.81% of deaths are caused by influenza and pneumonia combined, making them some of the most deadly diseases in Afghanistan.

Tuberculosis
Tuberculosis is a contagious infection that attacks the lungs specifically but can also affect the brain and spine. It is caused by a bacteria called Mycobacterium tuberculosis. It is generally spread through the air, similarly to the common cold. The germs grow slowly, making it contagious but not easy to catch. Deaths caused by tuberculosis is currently ranked at number 17 in the world, making it one of the most dangerous diseases in Afghanistan.

These common diseases in Afghanistan represent a significant risk to the country’s citizens. The Afghan government, along with other organizations such as the World Health Organization, have been working hard to spread awareness and promote positive health in the country. There is still much that has to be done in Afghanistan in order to promote the positive health of its citizens and to limit the impact of these diseases.