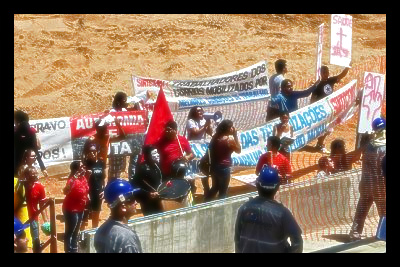 Brazil has earmarked $3.5 billion in public money for the construction or renovation of 12 stadiums in preparation for the 2014 FIFA World Cup. The twelve stadiums which are spread throughout the country will host a total of 64 international football matches for the duration of the month long tournament.  Brazil is mortgaging the house in the hopes of luring millions of visitors to the region in the upcoming months, bringing increased economic returns to the country.

In the seven years Brazil has had to prepare for the World Cup, the country has been concentrating on constructing stadiums, upgrading the infrastructure, building hotels and beefing up national security. Unfortunately, not all developments have gone according to plan: the construction of at least six stadiums have been delayed or are behind schedule which has jeopardized further needed preparations for the events.

Not only has FIFA (the international governing body for football) voiced its concern for construction delays, protesters and worker strikes have questioned Brazil’s prioritization of public money towards the tournament. Protestors have petitioned for the government to use funds on improving public education, health care and transportation instead of funding the tournament. This deviation of public funds has sparked local criticism and contention for an international event that is meant to build global cooperation.

After the completion of the 2010 World Cup in South Africa, a few of the stadiums that were built for the event have become under-utilized and a source of local contention. For example, the Green Point Stadium in Cape Town, South Africa now is home to a small South African Premier League team which has had high operational costs and low revenue, leading to local calls for its demolition.

The City of Manaus, deep in the Amazon Jungle, is in danger of building another future under-utilized World Cup Stadium. The city is building a $240 million futuristic stadium which will only be used for four group-stage matches. At a cost of $60 million per match and with only a few minor league football clubs interested in using the site in the future, the future sustainability of this project is in question. A local Manaus judge and president of the state prison system suggested renovating the quarter billion dollar football stadium into a prison. Other local leaders have scoffed at this idea and have maintained the future viability of the stadium for local culture, events, and sporting, but only time will tell.

Even with the challenges Brazil has faced for hosting the 2014 World Cup, there continues to be massive demand for tickets for the tournament. There have been 6.2 million ticket requests for the 64 matches, which is almost 5 million more than were requested four years earlier. Let’s hope that Brazil’s gamble at hosting the 2014 World Cup will boost economic growth of the country, trickling down funds to needed improvements in education, health care and transportation.

Neo-Nazis in Russia College Books or Food?
Scroll to top