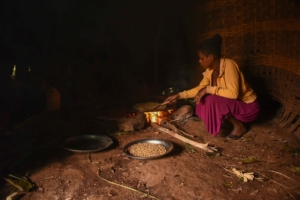 Wood-based cooking harms the health of humans and the environment. KopaGas is one of many social enterprises tackling this problem by transitioning Tanzanian families to a clean cooking technology that is gas-based rather than wood-based through an innovative pay-as-you-go business model.

Imagine that a family is cooking dinner in the kitchen. They put charcoal into the stove and water for stew begins to boil. As the water heats, thick, grey smoke from the stove fills the room, the family’s lungs and the surrounding forest. In Tanzania, 96 percent of the population still uses dirty fuel sources like charcoal and firewood for cooking purposes. This has a harmful impact on respiratory health and the country’s ecology.

Cooking with charcoal and firewood is comparable to exposing oneself to the smoke of 400 cigarettes per hour. Such air contamination contributes to roughly 4.3 million deaths per year worldwide. In Tanzania, respiratory infections are the second leading cause of death after malaria. In addition to devastating health effects, the resulting smoke causes ecological damage, particularly deforestation. A shocking 55 percent of the global wood harvest, representing 9 percent of primary energy supply, stems from traditional woodfuels.

To add to this, most wood-burning stoves are inefficient. Around 85 to 90 percent of the energy content of wood that people use for cooking becomes lost through the process of combustion. Such inefficiency means that people need to cut down more trees to satisfy the demand for woodfuel.

Households pay an upfront fee of $6.50 to receive a liquefied petroleum gas (LPG) cooking kit. Families pay for the gas through a pay-as-you-go (PAYG) model via mobile phone payment. A smart meter that attaches to the LPG cooking kit measures gas consumption feeding back into the mobile application. Transparent information allows families to understand consumption patterns which can help return control over personal finances.

KopaGas’ innovation is revolutionary not because it utilizes clean cooking methods, but rather because it makes gas-cooking affordable through the PAYG system. Rodriguez-Sanchez told Reuters that the PAYG model needs to prove itself at a large scale to attract greater levels of investment. However, KopaGas is already gaining early financial support from the Acumen Fund, HRSV, Saisan Co. and DEG / KFW.

In January 2020, the U.K.-based holding company, Circle Gas Limited, acquired KopaGas’ PAYG technology. The company aims to expand access to technology across Sub-Saharan Africa, where 900 million people have yet to transition to modern and clean cooking fuels. Further expansion will then move into East Africa where the focus of 2020 is in Kenya.

While KopaGas is attempting to transition households from woodfuel-based cooking to gas-cooking, others are taking completely different approaches. One example is ServedOnSalt that emerged in collaboration with the DTU Skylab_FoodLab, a Food System Change laboratory that Roberto Flore founded and leads. The ServedOnSalt project developed a battery using solar energy, salt and water to create a cheap and clean-powered cooking stove. KopaGas,  ServedOnSalt and other social enterprises within the clean cooking technology space are fundamentally transforming cooking practices in developing areas. These innovations are improving the health of humans and the planet.