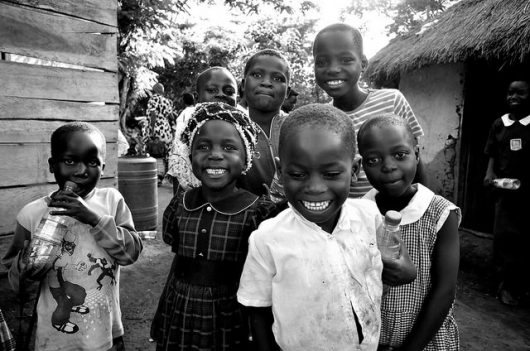 The Lord’s Resistance Army (LRA) began in 1987 in Uganda to rebel against President Yoweri Museveni. Children constitute most of the army. The LRA forces child soldiers in Uganda to commit acts of violence on other minors within the LRA ranks as well as brutalities on their own siblings.

LRA and Child Soldiers in Uganda

Joseph Kony heads the LRA. He grew up in the northern Ugandan village, Odek. His relative, Alice Auma Lakwena, began a rebel group called The Holy Spirit Movement in 1986 when Museveni seized power. In 1987, Kony declared himself a prophet, changed the name of the group to the LRA and began proclaiming rule based on the Ten Commandments.

In October 2005, the International Criminal Court (ICC) began attempting to arrest Kony. A peace agreement was finalized in April 2008, but the child soldiers in Uganda and neighboring countries remained an issue.

Since 2008, Kony and his forces have been shifting their presence to the Democratic Republic of the Congo, Sudan and the Central African Republic. The LRA Crisis Tracker, a website that reports LRA attacks and notifies email subscribers, lists 27 verified child abductions in these countries in 2018 alone.

Issues with the LRA

The LRA has displaced more than two million people since 1986 thereby increasing poverty in Uganda, especially in the north. However, the relation between the LRA and poverty is not mutually exclusive. The LRA and its brutal use of child soldiers in Uganda is a result of the harsh poverty that Kony and many others in the LRA ranks have experienced. Note the following:

When the British colonized Uganda in 1860, a centralized government did not exist. They created agricultural and commercial centers in southern Uganda.

This left the north to provide labor. The British found higher success rates in northern Uganda for army recruitment because it provided northerners an opportunity to improve their livelihoods. These divisions continued after Uganda gained independence in 1962.

Kony came from the impoverished north and is Acholi, an ethnolinguistic group. Idi Amin Dada, Former Ugandan President from 1971 to 1979, persecuted and executed the Acholi due to their military ties and alignment with Apollo Milton Obote, who was in office as the Prime Minister from 1962 to 1966 and as the President from 1966 to 1971 and then again from 1980 to 1985.

The British created a system where many Acholi people turned to the army to escape extreme poverty and then they were persecuted for it. Poverty and persecution influenced Kony’s disillusionment with the government and his desire to rebel and create child soldiers in Uganda.

However, the LRA’s actions have not combated the root issues of poverty and oppression. The cycle of poverty in Uganda propagates because of Kony and the LRA’s use of Ugandan child soldiers in the following ways:

Now that most of LRA’s presence is focused elsewhere, Uganda is working to solve its problems. In 2006, 31.1 percent of Ugandans were under the national poverty line, according to The World Bank’s 2016 Uganda Poverty Assessment. In 2013, it went down to 19.7 percent. Northern and eastern Uganda still suffer devastating consequences from Kony’s reign of terror, and the same study reveals that poverty has increased in those regions from 68 percent to 84 percent in those seven years.

In June 2009, the LRA had abducted 491 civilians and caused 484 civilian fatalities in Uganda. While peace is coming to Uganda and its children, the LRA still violently demonstrates its power in the Central African Republic and the Democratic Republic of the Congo, where it abducted 124 civilians in 2018.

In June 2018, there have been no reported fatalities or abductions, meaning there are no new child soldiers in Uganda this year. The growing peace in Uganda provides hope that the country’s poverty rate might reduce and that the LRA would not reign indefinitely.