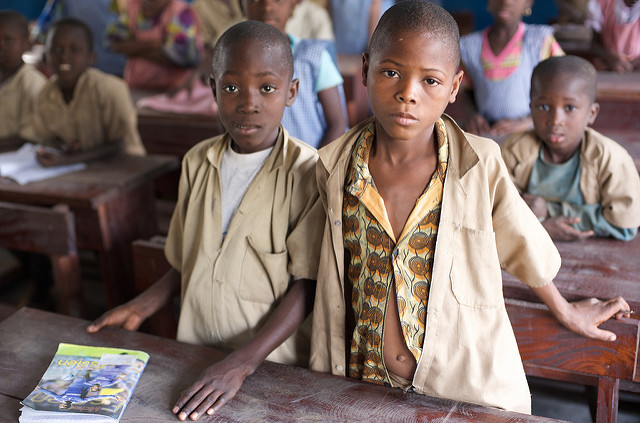 Africa is the only continent in the world in which poverty and malnutrition are on the rise. In a vast country with an undiversified economy, Malian households are especially vulnerable to poverty food insecurity.

Recently, Mali has faced “shocks” to its economic profile, including from a partial drought and internal strife. A 2013 World Bank study found that a 25 percent increase in cereal prices and 25 percent decrease in cereal production would push over 600,000 individuals to food insecurity levels in Mali. In addition, sustainably high population growth rates have risen the number of malnourished individuals in the country.

Effects of Child Malnutrition in Mali

While millions of Malians of all ages are affected by food insecurity, malnutrition is the second highest cause of death of children under the age of five. Almost 900,000 Mali children are at risk of global acute malnutrition in Mali, including 274,000 facing severe malnutrition and at risk of imminent death, according to UNICEF and the World Bank. To put this in the context of the country’s population, a 2013 World Bank study found that 44 percent of Malian households have at least one chronically malnutritioned child.

Malnutrition leads to devastating, long-lasting effects on young people. Research by an associate professor at the Federal University of São Paulo, Ana Lydia Saway, shows that malnutrition is linked to higher susceptibility to gain central fat, lower energy expenditure, higher blood pressure and disruptions in insulin production. These are all factors which heighten the risk of other chronic diseases later in life.

How Mali is Combatting the Issue

Child malnutrition in Mali is a significant concern, requiring action and deserving worldwide attention. But a major problem limiting international assistance comes in the form of funding for aid.

In May, UNICEF reported that limited donor interest in the region has made it increasingly difficult for the organization to provide children with therapeutic food necessary to combat malnutrition. Funding for humanitarian organizations is low, as nearly 80 percent of UNICEF’s $37 million call for humanitarian aid for the year 2018 has not been raised.

“The children of Mali are suffering in silence, away from the world’s attention,” UNICEF Executive Director Henrietta H. Fore said during a visit to the country this year. “Amid increasing violence, more children are going hungry, missing out on learning and dying in the first days of life.”

Still, community and international-based organizations are working to mitigate the effects of child malnutrition in Mali. For example, in the capital of Ségou Centre, the local population, with the help of the World Bank and Swiss Corporation agency, is working to provide necessary social services to its commune.

The third phase of this project involved the decentralizing of health facilities, which were starchly underequipped. The commune recently constructed a community health center, showing promising bottom-up action within Mali. Other organizations are helping out to create sustainable progress in development, including Groundswell International.

Furthermore, farmers and processors in Mali have been working together to increase the presence of Misola flour to combat malnutrition. During processing, vitamins and minerals are added to the flour, targeting those with nutritional deficiencies.

A 2012 study published in the Journal of Nutrition and Metabolism found that Misola can help rehabilitate undernourished children and help those with depressed immune systems. “The porridge made from the flour allows for a nutritional transition from breast milk to traditional solid food,” Fernand Rolet, co-President of the Misola Association, said.

Rwanda provides a prime example that overcoming child malnutrition is possible. The nation, which has a similar wealth level to Mali, has made progress in lowering malnutrition levels. A 2015 Comprehensive Food Security and Vulnerability Access Report found that the level of stunting in young children dropped seven percent from three years prior. In Rwanda, the World Food Programme has been largely active, supplying food assistance such as providing meals for thousands of primary school children.

Combating malnutrition is an ongoing struggle, especially in Africa. Due to poor economic conditions and food scarcity, malnutrition continues to take the lives of thousands of children in Mali each year. Although citizens have founded programs to improve child nutrition and the issue is on humanitarian aid organizations’ radars, it is clear that more effort is needed to eradicate the problem. With continued efforts, child malnutrition in Mali will begin to decline.