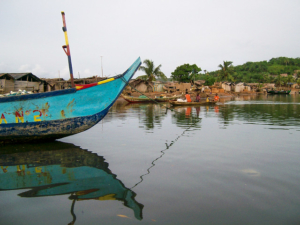 Ghana, a small African country nestled between Togo and Ivory Coast, is one of the highest achieving nations in the sub-Saharan region. It is the world’s second-largest producer of both cocoa beans and gold, and this generative economy has propelled much of the Ghanaian population out of poverty.

While ahead in some regards, Ghanaian children are still subject to human trafficking. According to the United Nations’ International Labour Organization, over 152 million children around the world are forced into the workforce. Africa is among the worst offending areas, and as such, brings child labor in Ghana to international concern.

Child labor is a National Issue

Currently, one out of every six children is involved in child labor in Ghana. Offending sectors are numerous and widespread; 88 percent of children work in agriculture, typically harvesting cocoa beans, while 2.3 percent are fishermen. Others are subjected to domestic or sexual work.

Many Ghanaian children participate in child labor due to desperation and ignorance. While free public education is available in Ghana, many families cannot afford the uniforms and books required to enroll in school. Poverty is, therefore, cyclical in these circumstances – much more than cheap labor is being exchanged. A child is also selling his or her childhood, dignity and future potential to their traffickers.

Lake Volta is the largest man-made lakes in the sub-Saharan region. It is notoriously known as an area where the worst forms of child labor prosper. Here, one-third of children between the ages of seven and 14 work full-time.

Children are valued workers on Lake Volta because their labor is affordable and efficient. Recently, the lake’s fish population has decreased considerably. Fishermen, therefore, do not have the financial means to accommodate other sources of labor. Furthermore, children provide the nimble fingers needed to untangle fish from the minuscule-sized holes in fishing nets.

Aside from posing as a serious human rights violation, work on Lake Volta is quite dangerous for Ghanaian children. Nets often get stuck on objects underneath the surface. This forces children to go diving in order to prevent tears in the nets. Drowning is a concern, as well as contracting several illnesses including bilharzia and guinea worm.

The central government made several, moderate efforts to control the unbridled child labor in Ghana. In 2017, the National Plan of Action for the Elimination of Human Trafficking was enacted. With it, the government identified itself as an entity against the exploitation of its young generation. Children working in mines are a specific concern for the government, as mercury poisoning is prevalent among workers in this sector. Feeding programs have also been instilled in schools and refugee camps in order to protect children from malnourishment.

These efforts, while well-intentioned, are not efficiently enforced in the country. This leaves many children in enslavement, or at risk of falling into this dark reality.

Child labor is a human rights violation to which the international community has responded with animosity and vigor. There are countless organizations working to end all forms of child labor and trafficking.

APPLE is just one NGO that specifically works to hinder the growth of child labor in Ghana. This organization has stationed itself in fishing villages around the Lake Volta region. Their efforts to eliminate child labor compromises of immediate and long-term solutions. The banning of nets with small holes is believed to decrease the value of children on the lake, and education is provided in order to warn families of the calamities that human trafficking inflicts.

While the sub-Saharan region is not the only area that violates international human rights laws, child labor in Ghana is on the rise. Efforts to protect the most innocent collection of the population need to be mobilized with the utmost zeal. These children need aid in order to liberate, educate and relocate those displaced by this practice.

10 Facts About Life Expectancy in Iceland ACCORD: Finding Strategies for Peace in Africa
Scroll to top