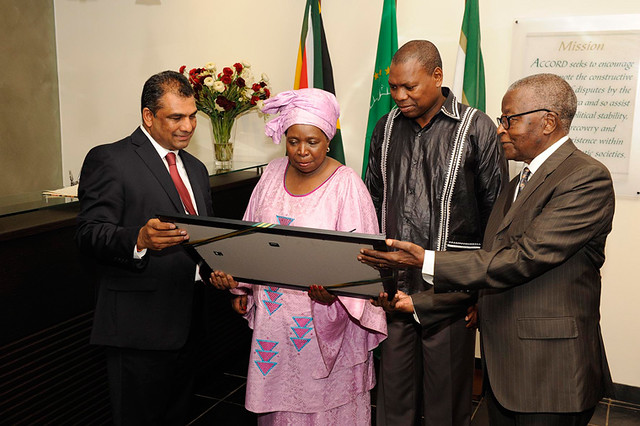 Political unrest, ethnic tensions and legacies of colonial exploitation beget chaos and violence in many parts of Africa. Wars, border disputes and ethnic violence cause destruction, divide families and disrupt economies, consequences which create and perpetuate poverty. Fortunately, some nonprofits are partnering with local communities, leaders and intellectuals to work toward conflict resolution, and ultimately, peace in Africa.

The African Centre for the Constructive Resolution of Disputes (ACCORD) is a nonprofit civil society organization and think tank that specializes in conflict management, analysis and prevention. Vasu Gounden, who believes that innovative solutions to conflict in Africa must come from the minds of African citizens, established it in 1992 in Durban, South Africa. ACCORD works closely with international organizations like the U.N. and the African Union (AU) to facilitate negotiations, train mediators and encourage healthy relationships among African leaders. The organization also conducts extensive research through analysis and experience-sharing events and Pennsylvania University’s prestigious ranking process has ranked it as one of the top 100 think tanks worldwide.

ACCORD’s six pillars for peace illustrate the organization’s strategy for establishing peace in Africa through activism and dialogue. ACCORD recognizes the importance of listening to key stakeholders like women and youth, who peace processes often underrepresent, by working to elevate their roles in mediation and post-conflict reconstruction. The organization also works with Regional Economic Communities (RECs) to develop peacebuilding strategies like mediation training, dialogue frameworks and reconciliation strategies. The regional dimensions of most security challenges in Africa (border disputes, multinational ethnic group tensions, ideological extremism and cross-border displacement) put RECs in a unique position to prevent and troubleshoot conflicts. This relationship is at the forefront of ACCORD’s strategy; the first pillar for peace is “to reinforce the institutional capacity of the AU and RECs to prevent and peacefully resolve conflicts.”

ACCORD regularly organizes and hosts high-level retreats and roundtable events with the AU, U.N., RECs and civil society organizations (CSOs) to address such issues as civil wars, sexual and gender-based violence and socio-economic impediments to peace and development. These roundtables build networks linking African peace workers and mediators across the continent. Scholars agree that CSOs link social, geographic and economic groups in society and play a critical role in providing domestic oversight and upholding institutions. ACCORD’s retreats and workshops, like its Lessons Learned from Inclusive National Peacebuilding Processes workshop, connect CSOs in order to foment peace in Africa. Discussions at roundtable events troubleshoot peacekeeping mechanisms like early warning systems (which analyze and predict conflict) and encourage peer-to-peer collaboration on women’s rights, mediation strategy, education, economic development and other issues.

ACCORD has also been working to combat the sexual violence that often accompanies conflict. In February 2019, the organization participated in a Training of Trainers course to inform African peacekeeping institutions about how to prevent sexual exploitation and abuse in peacekeeping operations. In light of a recent scandal wherein, more than 43 U.N. peacekeepers received accusations of sexual exploitation or abuse, training like this is crucial in preventing future incidences of sexual violence.

ACCORD has intervened in 34 countries across Africa, employing peacemaking, peacekeeping and peacebuilding strategies to mediate and contain conflict, developing capacities for peace. The organization has been running a peace program in Burundi, one of the poorest countries in the world, since 1995. Throughout the Burundi civil war, ACCORD trained community leaders, civil society, political actors and other key stakeholders in conflict prevention, management and transformation.

Additionally, ACCORD has launched a peace initiative in the Central African Republic (CAR), and in November 2018, hosted a dialogue for members of the CAR’s negotiating team. Themes during the dialogue included negotiation techniques, classical and nonverbal communication, the concept of strategic compromise and ways of dealing with armed groups.

Conflict monitoring, analysis, prevention and resolution are integral in establishing foundations for peace in Africa. Many recognize the connection between conflict and poverty, and how it can be detrimental to communities. Only when conflict-ridden communities establish peace, economic prosperity and collective well-being can become reality. ACCORD works with community leaders, civil society organizations, individuals and other stakeholders across Africa to establish foundations for peace and conflict management.