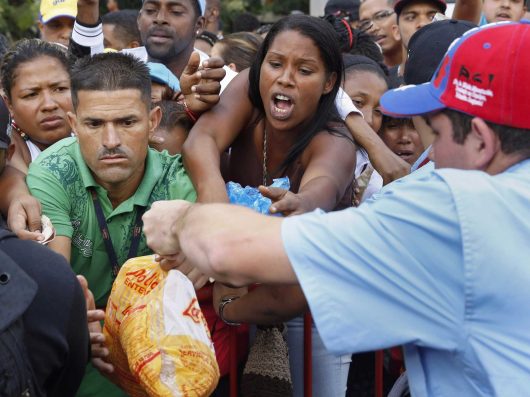 Beginning in 2014, oil prices around the world began to plummet. This sparked an extreme financial crisis in Venezuela, whose economy is based solely on its immense reserves of the fossil fuel. This evolving crisis has contributed to dire food shortages in Venezuela. The CEO of Empresas Polar, Lorenzo Mendoza, is working to aid fellow Venezuelans in need. Oil became a source of vast political influence in Venezuela once the industry became nationalized in 1975. The Washington Post reports that oil currently makes up about 95 percent of the region’s revenue from exports.

In 2013, following the death of Hugo Chávez, former Vice President and current Head of the United Socialist Party of Venezuela Nicolas Maduro was elected president and promised to continue the policies of his predecessor. According to The Washington Post, Maduro is “discouraging private industry that could have diversified the nation’s economic base” and using revenues from PDVSA, the state oil company, to “pay for generous social welfare benefits that won votes.” This lack of diversification and unruly spending, combined with the harsh drop in oil prices, has left the economy and citizens of Venezuela in turmoil. The International Monetary Fund’s figures show that Venezuela “went from earning $80 billion from oil in 2013 to a projected $20-25 billion in 2016.” This discrepancy of billions of dollars has created food shortages in Venezuela, resulting in riots and violence. Numerous looters have been shot and killed, hundreds have been arrested and lines of hungry families continue to grow.

Political and economic instability has allowed crime to prosper. According to the Los Angeles Times, “gangs on motorcycles have fought over the right to control and distribute food.” Instead of taking responsibility for the lack of revenue, mounting inflation and food shortages, President Maduro has shifted blame onto the U.S. government, as well as Mendoza. Mendoza’s business, a large-scale food processing and brewery corporation, is a unique entity within Venezuela’s socialist society. Empresas Polar is the largest privately owned enterprise in a country whose government controls a substantial portion of businesses.

President Maduro accused Mendoza of withholding goods and slowing production during the crisis. The Wall Street Journal reports that the government views Mendoza as “a traitor responsible for the scarcities.” Mendoza denies all accusations and believes that it is the government’s control of prices, lack of imports and halts in production forced by a lack of federal funds that is fueling the food shortages. In fact, Mendoza is actively fighting to end the overwhelming food shortages in Venezuela. The CEO is urging his government to cooperate with organizations that can offer aid.

In February, The Wall Street Journal reported that Mendoza contacted Harvard economics professor Ricardo Hausmann to speak of “Venezuela’s need for up to $60 billion of loans from the International Monetary Fund and World Bank to avoid economic meltdown.” This cry for help will most likely go unheard, as Venezuela’s government has denied foreign aid from most countries, especially the U.S., since the time of Hugo Chávez.

While President Obama and President Maduro did meet for a few moments at the Summit of the Americas in April, Maduro spent most of his time lambasting Obama for his sanctions, which are based on human rights violations by a handful of Venezuelan officials.

In this time of crisis, Empresas Polar and its charismatic CEO Lorenzo Mendoza are bringing hope to Venezuela. Empresas Polar represents a bright future for Venezuelan business, as it is responsible for the employment of thousands, offers price-conscious products, a provides a profitable business plan and diversification of the Venezuelan market. Moreover, despite attacks on his character and livelihood made by the government, Mendoza will continue to fight for foreign aid to end the food shortages in Venezuela.

5 Things to Know About Poverty in Tajikistan Kenya: Model for African Nations in UN’s Blue Economy
Scroll to top