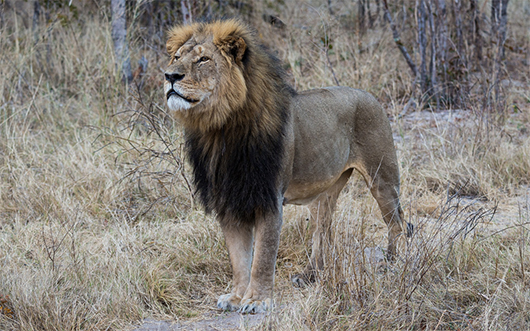 According to reports from The Telegraph, Cecil the lion, the most famous creature in Zimbabwe’s Hwange National Park, was killed—rather, poached—by an American hunter.

The Telegraph reveals that Mr. Walter James Palmer, a dentist from Minnesota, reportedly paid an estimated $50,000 to shoot and kill the lion. The weapon in question that was used to kill the lion was a bow and arrow. According to reports, Palmer used the bow and arrow in order to hide his tracks.

Palmer allegedly has a hunting felony history, which includes bears, deer, cougars and other various animals, some of which were endangered. Palmer faces charges from both the United States and Zimbabwe. The latter is seeking to extradite the dentist over the killing.

So, along with this tragedy and many others, what can happen when men like Palmer ignore the sanctity of wildlife preserves and poach for profit or “sport”?

Excessive poaching can lead to the degradation of natural habitats and eventually lead to a widespread state of environmental chaos. However, research has shown that it can also influence the lives of people living in poverty-stricken areas where the majority of poaching takes place.

In the past several years, the World Bank has expanded its understanding of how organized crime, corruption, illegal trade and money laundering affect development outcomes. In response, it has stepped up its work on issues such as stolen asset recovery, governance and anti-corruption work.

It has found that because of the lack of economic alternatives for people in the area, the poaching trade seems like the only alternative to provide a means to an end. Yet, what might seem like a lucrative venture can instead be the opposite. Many of these individuals are taken advantage of by the poachers, and they also do it at a heavy risk of prison time. All of these factors can lead to the degradation of their lives.

While fighting poaching by itself may only work to protect the endangered animals of the world, fighting the severe poverty in some of these areas may one day remove the incentive for poaching and the enabling of it, thus helping the impoverished communities, animals and habitats as well.