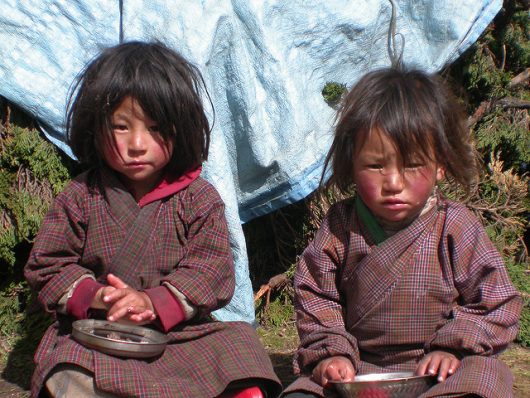 The Kingdom of Bhutan is a small Himalayan country of 750,000 people. Over one-third of the population lives below the poverty line. Ninety-six percent affected by the causes of poverty in Bhutan live in rural areas. The ones most impacted work outside the country’s modern economy, and include farmers, day laborers and small traders.

The Power of Nature in Bhutan Poverty

One cause of poverty in Bhutan cannot be controlled: the Himalayan landscape.

Natural disasters, such as floods and landslides, can wreak havoc on communities and ruin crops. Forces of nature can wipe out entire villages, forcing those already living in poverty to re-build their lives.

When weather conditions prevent a bountiful harvest, farmers do not have alternative options to financially recover. Farmers often don’t own enough productive land and livestock to gain financial security. Opportunities to generate cash income outside of agriculture are extremely limited, making farmers exclusively dependent on the success crops.  In rural areas, off-farm employment in rural areas is rare.

Rugged terrain also makes travel difficult for rural populations. A person may have to walk three hours to a few days to reach a highway or main road. These demanding journeys limit access to social and health services, markets, technology and education.

The Struggle of Large Families, Students and Laborers

Other causes of poverty in Bhutan are due to family size, lack of education and limited jobs.

Large families with a high dependency ratio (children and adults who cannot work) experience more poverty in both urban and rural areas. As of 2004, 49 percent of families in the rural areas of Bhutan had six or more members. These families experience labor shortages when youth and working adults leave their villages for the country’s urban centers.

A student in Bhutan’s rural regions may have to walk two to three hours each way to access the nearest primary school. Because access to education is difficult and limited, the adult literacy rate and opportunities to gain productive skills in the rural areas of Bhutan remain low. As of 2004, less than half of the Bhutan’s rural population was literate.

For day laborers and small traders outside of Bhutan’s agriculture-based economy, low earnings are often not enough to overcome poverty. Even when laborers and traders work more than one job, they are often unable to earn enough to live consistently above the poverty line.

Local government is working to address the causes of poverty in Bhutan and build long-term solutions and comprehensive development programs, especially in rural areas.

Despite the various causes of poverty in Bhutan, the country is well-known as one of the happiest countries in Asia. As Bhutan aims to overcome poverty, it carries the rich success of its famous priority: happiness.