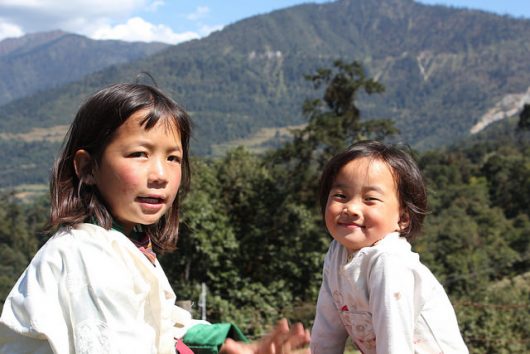 Bhutan is a small landlocked country in the Himalaya region of Asia. The country’s remoteness has largely affected its people by preventing economic progress until the 1960s. Until then, the country did not have a currency of its own, telephones, schools, hospitals or postal services, keeping the country completely secluded from the world around them. In 1961, the country’s king decided that the country needed to join the modern world, improving the poverty rate in Bhutan greatly.

In recent years, Bhutan has significantly lowered the number of citizens living below the poverty line. Between 2007 and 2012, the country was able to reduce the number of those living in poverty from 23 percent of the population to 12 percent. While most of the poverty reduction has been in rural areas of the country, these same families are the ones most at risk for slipping backwards.

The commercialization of agriculture as well as the creation of roads and hydropower projects allowed for more economic stability for those who made their living in the farming industry. While this has created great prosperity for rural areas in Bhutan, the agricultural industry is still the most vulnerable within the country, susceptible to environmental catastrophes.

While the poverty rate continues to decrease and the country’s GNI per capita increases yearly, the Bhutanese government refuses to stop there. The government has recently made a commitment to reduce multidimensional poverty to five percent by the end of 2018. One of the biggest initiatives under this new plan is to give land to 245 households that previously had unusable or no land.

While a good portion of the country’s people still live in poverty, Bhutan has seen incredible progress in the past 10 years. The poverty rate in Bhutan has seen a dramatic decrease and the government continues to implement programs in hopes of providing more opportunities for the people.