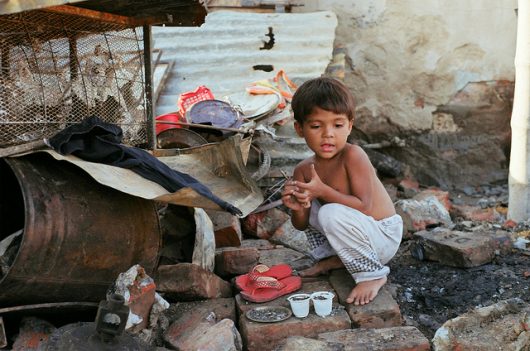 The causes of poverty in Bangladesh are tough to tackle, but the country has nonetheless shown impressive improvements and resilience over the years.

For instance, the country has made remarkable progress in poverty reduction in the last couple of decades: according to the World Bank, Bangladesh managed to reduce its poverty rate—defined as the percent of the population living below $1.90 a day—from 44.2 percent in 1991 to 18.5 percent in 2010.

This reduction was possible thanks to a steadily increasing growth rate between five and six percent yearly between 1991 and 2010. Growth resulted primarily from Bangladesh’s expanding textile and garment industry, which draws in $20 billion annually and has given jobs to more than four million people.

However, poverty remains a serious problem that hinders Bangladesh’s ambition of becoming a middle-income country. Although there are many causes of poverty in Bangladesh, some of the main culprits are calamitous weather, weak infrastructure and gender inequality that prevents women from contributing to the economy.

One of the factors that generate poverty is the prevalence of natural disasters. As a low-lying country situated on the Bay of Bengal, Bangladesh is one of the most vulnerable countries to violent weather patterns that regularly destroy crops, homes and lives. Since agriculture supports 47 percent of the population, the losses can be especially devastating: a massive blow from a flood or a cyclone can cut off villages’ access to food, electricity and water.

Additionally, Bangladesh has the disadvantage of being situated on active tectonic boundaries, making it susceptible to earthquakes and tsunamis. A natural disaster can crush gradual progress in a community in an instant.

Another of the main causes of poverty in Bangladesh is the lack of infrastructure. As the densely populated country continues to grow, reliable means to get to work becomes a necessity for people to earn their day’s wages. Bangladesh only spends two percent of its GDP on infrastructure, while other states such as China, Thailand and Vietnam invest more than seven percent. Although spending on infrastructure can be expensive, not investing in it proves to be costly in the long term.

For instance, poor city planning in the capital, Dhaka, creates severe traffic that chokes 3.2 million hours of productivity in a day, which costs the country millions of dollars lost in GDP per year. This is not to mention the daily waste of fuel that is caused by congestion.

Lastly, compared to international standards, women have a low labor force participation rate of only 34 percent in 2013. In contrast, 82 percent of Bangladeshi men are in the workforce. If the percentage of women working matched to that of men, Bangladesh’s GDP would see a 27 percent increase.

Women taking part in the economy is crucial: according to research published in The Atlantic, “gender inequality and poverty are closely intertwined; tackling the former means mitigating the latter.”

Although dealing with the causes of poverty in Bangladesh are complex, the country has made extraordinary developments since the time of its independence in 1971. Once dismissively called a “basket case” due to rampant poverty, it is described now as “the land of impossible attainment:” it moves up regardless of hurdles.