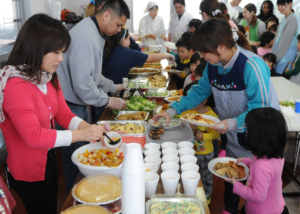 While Japan is one of the most developed countries in the world, the country has a pressing issue to solve — child poverty. According to a report by the Organisation for Economic Co-operation and Development (OECD), in 2017, Japan’s child income poverty rate stood at 16.3%, 2.9% greater than other OECD countries. To tackle this issue and meet the needs of children, some Japanese volunteers have set up children’s cafeterias in Japan, also known as Kodomo-Shokudo.

3 Facts About Child Poverty in Japan

To address the issue of child poverty in Japan, a vegetable shop owner, Hiroko Kondo, came up with a practical solution – children’s cafeterias. Kondo established the first cafeteria in 2012. The story goes: a primary school teacher told Kondo that a particular student “had only a banana to eat for the day besides school lunch because his single mother was sick.” After hearing this, Kondo decided to open a cafeteria for disadvantaged children in her neighborhood and offered them low-cost but nutritious dinners twice a month.

Kondo’s initiative has inspired many volunteers in Japan, leading to an uptick in children’s cafeterias in the country. By 2019, Japan noted 3,718 children’s cafeterias, a 62% increase from 2018. Interestingly, every children’s canteen operates differently. For instance, while one canteen opens between 6 a.m. and 8 p.m. every Monday, giving free meals for children, another “opens from 5.30 a.m. and 7.30 p.m. on the first and third Wednesday each month,” offering 300 yen ($2.07) dinners for children and adults.

During the COVID-19 pandemic, many children’s cafeterias were able to keep their doors open. Some volunteers, however, changed the style of operation. Instead of providing meals in cafeterias, they made boxed lunches for children to collect.

Overall, child poverty is an issue in Japan that authorities often neglect. To tackle the problem, individuals like Hiroko Kondo took the initiative in 2012 by opening the first children’s cafeterias in Japan to offer needy children nutritious meals at discounted prices. More importantly, Kondo’s action has created a ripple effect — helping to address child poverty in Japan on a broader scale.