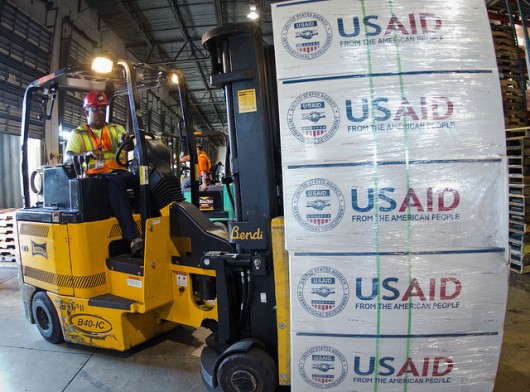 U.S. foreign aid has had a variety of strategic and humanitarian purposes throughout the 20th century. Although initiatives have changed across the decades to address the global “hot topics” of the day, the focus has always been on using aid to address crises, create security and spark development.

U.S. distribution of foreign aid began at the onset of World War I, when in 1914, President Hoover created the Commission for the Relief of Belgium (CRB) to combat a severe food shortage in German-occupied Belgium and Northern France.

In 1917, the U.S. Food Administration provided food for the United States Army and to the millions of people affected by World War I.

International development as a tool for foreign policy began following World War II. The Marshall Plan, diverting $13 billion in aid, allowed Europe to rebuild its infrastructure and strengthen its economy.

In 1961, President Kennedy signed the Foreign Assistance Act, which created USAID. The president also introduced the Peace Corps the same year, which was intended to spread America’s goodwill and positive image across the globe.

In the 1970s, the Foreign Assistance Act underwent substantial changes that gave food, nutrition and healthcare aid priority when assisting a foreign nation.

In the 1980s, we saw the introduction of a new method of aid giving: using celebrities to gain support for a cause. In 1985, the Live Aid concert, featuring stars like Led Zepplin, Queen, Tina Turner and Madonna, raised $140 million toward fighting poverty and hunger in Africa. This was at a particularly urgent time due to a major drought in Ethiopia that caused widespread famine.

In the 1990s, with the end of the Cold War, USAID’s top priority of U.S. foreign aid became sustainable development, focusing on aid that would help nations become self-sufficient.

One of the major U.S. foreign missions was in Somalia in 1992. Famine and ongoing civil war in Somalia led to a humanitarian relief effort by sending troops and delivering basic supplies. Although the military intervention was largely unsuccessful, it served as a learning point for how both U.S. and U.N. interventions should be conducted.

The 2000s created an extra urgency around foreign aid as a means of creating stability. Development is included as one of three pillars of U.S. national security.

The President’s Emergency Plan for AIDS Relief was created in 2003 and President George W. Bush created the Millennium Challenge Corporation in 2004.

Some politicians argue that the U.S. should solve its own humanitarian issues before getting involved in other countries. However, America’s role as a world power makes it impossible for the country to turn a blind eye to the plights of other nations.

History has shown that U.S. foreign aid, if monitored and updated correctly, can do great things to fight poverty and ensure security.

The Rise of 3D Printing in the Middle East and Africa What is Happening with Haiti’s Delayed Presidential Elections?
Scroll to top