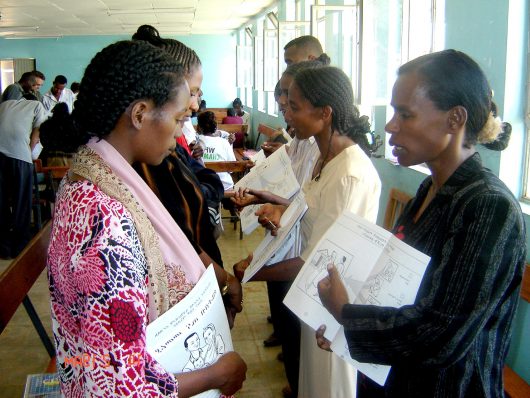 Breast cancer is the most common cancer found in females in both developed and developing countries. The occurrence of this cancer is soaring in developing countries due to factors such as increases in life expectancy, the expansion of urbanization and the endorsement of a more Western lifestyle. Breast cancer in Ethiopia is becoming the most prevalent disease among Ethiopian women, surpassing cervical cancer.

Many factors are known to contribute to breast cancer in women, such as the age at which women deliver children, poor diet, lack of physical exercise, uncontrolled consumption of alcohol and the lifestyle a woman lives.

Some of these factors might be reduced with lifestyle changes. However, prevention cannot eliminate the majority of breast cancer diagnosed in very late stages in low and middle-income communities. Early detection is important in order to improve breast cancer outcomes.

Pink Ribbon Red Ribbon (PRRR) is a global partnership comprised of national governments, corporations, foundations and NGOs, all working with the same intent: to reduce deaths caused by cervical and breast cancer in low- and middle-income communities.

By mobilizing resources from its cohorts, PRRR and its collaborators work on interventions ranging from prevention to medical care by educating the community about cancer, vaccinating young girls against HPV, screening women for breast cancer and cervical cancer and increasing access to treatments.

PRRR began supporting the government of Ethiopia in 2014 with the formation of a comprehensive cancer control program. With backing from PRRR and the Mathiwos Wondu Ye-Ethiopia Cancer Society, the first National Cancer-Control Plan (NCCP) was launched in October 2015 by Ethiopia’s first lady, Roman Tesfaye.

The plan is to launch five cancer treatment centers in the country, relieving the burden on the Tikur Ambessa Hospital in Addis Ababa. The government has committed $12 million to develop these centers at teaching hospitals in the areas of Mek’ele, Gondar, Jima, Hawassa and Haromaya.

The NCCP also called for cancer screenings to be offered in all of Ethiopia at locations known as “Screen-and-Treat” sites, which will be available in 118 locations. PRRR is pleased to contribute technological and monetary assistance to complement the investments of the Ethiopian government to implement this vision.

PRRR is also backing the government of Ethiopia in opening more cervical and breast cancer screening locations in the two most populated regions and Addis Ababa.

With foundations like Pink Ribbon Red Ribbon breaking ground in Ethiopia where there are not many resources available to most women, the awareness of breast cancer in Ethiopia is becoming much greater. With continued work, more progress will be made in the prevention and early detection of the disease.