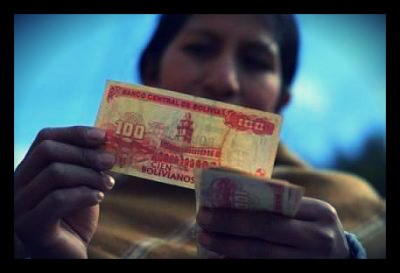 In the wake of recent national economic gains, Bolivian President Evo Morales has promised that the nation’s minimum wage will increase by 10 percent.  The move is a hotly debated one concerning Bolivian unions, and the employer federation has been embroiled in the debate for some time.  The labor unions applaud it, saying it would equalize things between the “haves and have-nots,” while the Confederation of Private Entrepreneurs (CEPB) spurned it and contended that it would increase taxation.  A BBC report also notes that President Morales is in an election year and may have had political reasons for siding with union wishes.

The same BBC piece also points out that “Bolivia’s gross domestic product tripled to $27 [billion] in 2012 since Mr. Morales took office in January 2006, according to World Bank figures.”  Changes to the national Constitution and increasing the role of the state contributed to the gains, along with “high commodity prices and a prudent macroeconomic policy.”  The World Bank also states that public debt dropped vastly, bolstering the banks in the process and alleviating national poverty to a great degree.

However, despite the gains nearly half of all Bolivians still live in poverty.  The unpredictability of commodity pricing can affect and potentially reverse positive gains, so private industry must play a more substantial economic role.  Bolivia’s informal economy, where a large portion of the population finds work, “results in lower productivity” according to the World Bank.  Lagging infrastructure is also a deterrent to further and faster progress.

The International Monetary Fund (IMF) is projecting slower economic growth in Latin America in 2014.  “Weak investment and subdued demand for the region’s exports held back activity in 2013… For 2015, the IMF projects a modest pickup, to 3 percent. The key risk is a sharper decline in commodity prices caused by weaker demand.”  More specifically, growth in Bolivia “is projected to fall sharply in 2014, to about 2.75 percent  from nearly 6 percent in 2013.”

President Morales may be trying to draw support from his political base with his pledge to increase the Bolivian minimum wage.  In 2013, Morales was publicly inveighed when per diems paid to the families of Morales and his vice president were worth “more than twice the minimum monthly wage,” according to an AFP report.  The money covered travel expenses when the families accompanied the leaders on official trips.  Political rival Adrian Oliva likened the per diems to stealing and contended that Morales had abandoned his socialist roots.

The science behind hiking minimum wage rates is contentious to say the least, often crossing the proverbial bridge from impartial observation to political overtones.  However, the work of UC Irvine economist David Neumark and William Wascher of the Federal Reserve Board can’t be easily disputed.  A Forbes report said they “determined that 85 percent of the best research points to a loss of jobs following a minimum wage increase.”  Empirically, the wage increases aimed at eliminating poverty also quash private sector employment and hiring; a study in the Journal of Human Resources posits that higher minimum wage can increase poverty.

What lies ahead for Bolivia and the rest of the Latin American region remains to be seen as outside economic forces control the commodity rates that are so woven into recent economic gains.  In a race for political power and reelection, Bolivia’s Evo Morales has evidently chosen to adhere to the populist vision that won him initial favor, but at what cost?

Do large-scale informal economic gains qualify as a national victory when nearly half of all Bolivians are still considered poor?  Does alienating the private sector through a push for more reforms mean greater prosperity and long-term economic growth and stabilization?  What is clear is empirical evidence suggesting that minimum wage hikes do more harm than good, even in a strong commodities market.  President Morales may be best served to explore other options that appeal not only to national unions and workers but to the firms who employ them, thereby increasing private investment and paving the proverbial road out of Bolivian poverty.

Why is Soheir Battaa Dead?Bringing Clean Energy to Developing Countries
Scroll to top