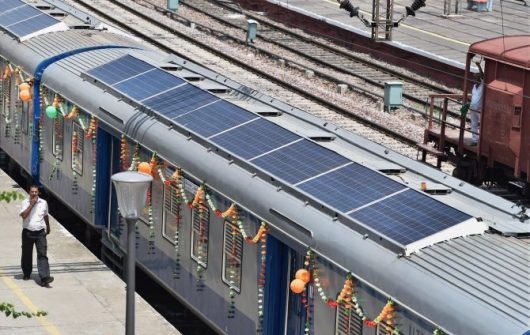 While cars may not be able to fly, solar energy can now power trains and this might be the next best thing. On July 14, 2017, India’s first solar-powered train hits the railroad as the country looks to move toward more renewable energy sources.

As a nation, India has long relied on railroad transport to get from one place to another. With 68,000 kilometers of railroad, India is the country with the fifth-greatest capacity for rail transportation. These rails play a critical role in transporting both passengers and cargo around the country.

Railroads account for 85 percent of India’s passenger traffic and 60 percent of its freight capacity. However, railways in India emit a significant amount of carbon dioxide. As a nation, India contributes four percent of the world’s fossil fuel emissions, posing serious environmental challenges.

The DEMU (diesel electric multiple train) that was launched out of the Safdarjung train station in New Delhi is expected to offset these emissions. The DEMU train is significantly more environmentally friendly than previous train models and counteracts carbon emissions by nine tons per coach per year, with a total of six coaches.

The design for the DEMU train was completed by Jakson engineers after they were awarded this project by Indian Railways Organization for Alternate Fuels, a unit of Indian Railways focused on promoting biodiesel and other alternative fuels for India’s railways.

The solar panels on India’s first solar-powered train have the capacity to power its internal lights, fans, and other electrical systems within the train, generating a total of 7,200 kilowatts per system per year. Additional energy generated during peak hours will be stored in a battery.

Regardless, with India’s expanding economy, it is necessary to address the limitations of current methods of transportation. While a commitment to renewable energy sources like solar power curbs carbon dioxide emissions, India’s current transportation methods pose certain limitations.

Transportation infrastructure is strained and unable to support future economic growth that could help alleviate poverty for many. Trains in India do reach most of the population, but rural areas are often under-served and many of the poor are not connected to India’s main economic centers by road or railway.

While India’s current dependence on rail transportation poses economic and poverty-related problems, the shift toward more environmentally sustainable practices alleviates some of these issues and India’s first solar-powered train is a good step towards this.