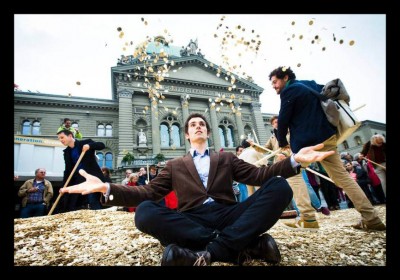 Universal Basic Income is a concept where everyone receives a check from their government every month to pay for any necessities one may need. Although the thought of Universal Basic Income (UBI) is a radical move for any country, it can be a way to alleviate poverty. Instead of Food Stamp and Welfare programs, citizens would receive one lump sum check regardless of status. According to the Huffington Post “it could eliminate poverty to a great extent, and set the stage for a healthier and more productive society.”

Switzerland citizens have been fighting for this movement and have sparked a public referendum to push the movement forward. The country has seen the possible benefits of what a UBI can accomplish. Families can have food security, income inequality would decrease, and if countries adopt the idea with success may influence other countries to do the same. In the 1970’s Canada experimented with the implementation of a UBI, and according to the New York Times “poverty disappeared…High-school completion rates went up; hospitalization rates went down.”

Another reason this topic is so vital in today’s world is the advancement of technology. The Guardian has found “Oxford academics Carl Benedikt Frey and Michael A Osborne have predicted computerisation could make nearly half of jobs redundant within 10 to 20 years.” Thus, the more technology grows, the less jobs will be available to the public.

However, the chance of having a UBI gives citizens a way to achieve their professional dreams. Instead of people working a job they need to survive, with a monthly check from the government they can focus on what they really want to do. The economist has studied “Philippe Van Parijs, a Belgian philosopher, who believes a UBI provides ‘the real freedom to pursue the realization of one’s conception of the good life’” Therefore, a family living in poverty will lose the stress of worrying about their next meal and children can focus on education.

If this concept seems so beneficial why hasn’t it been done? One of the main concerns of creating a UBI is the downfall in work ethic; there is a possibility of laziness if people receive checks for simply being alive. Another drawback is the raise in taxes, BBC has stated “income tax would not necessarily rise, but value added tax – on what people buy rather than what they earn – could rise to 20% or even 30%.”

Despite some negativities in a UBI, it is an idea that may soon be adopted by a majority of the world. With its recent conversation in many governments there seems to be a positive outlook on this concept. A universal income may sound outlandish but so does ending world poverty; yet, both are achievable in the near future.