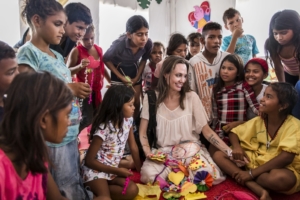 Unlike her character as a bad girl in Tomb Raider or as a vengeful Maleficent, Angelina Jolie has a soft spot when it involves philanthropy work. The American actress has a long record of helping communities globally. Although a mother of six, Jolie pauses her mom duties to find time to visit developing countries, improve the lives of refugees, get involved with charitable work, create foundations and fund schools in other countries. She is a Goodwill Ambassador for the United Nations High Commissioner for Refugees and is serving as the co-chair of the Educational Partnership for Children of Conflict.

Jolie uses her role as a Goodwill Ambassador to advocate for those who are no longer safe in their home countries. Most recently, Jolie has traveled to Peru and Colombia to visit Venezuelan refugees. During her trip to Peru, she spent two days in Lima at the border where massive groups of refugees enter daily. She spoke with a few refugees to hear stories of what their lives were like before migrating in hopes of a better life and freedom.

Nearly 1.3 million Venezuelans are living in Columbia, and Jolie made it her mission to visit a few of them during her trip there. Jolie met with Colombian President Ivan Duque to express concern over the 20,000 Venezuelan children who are at risk of being without basic citizenship. They discussed how children can become nationalized and the importance of international support.

In a statement given at the press conference at the Integrated Assistance Centre, Jolie expresses how serious the influx of refugees affects not only the refugees themselves, but the countries they settle in.“The countries receiving them, like Colombia, are trying to manage an unmanageable situation with insufficient resources,” Jolie said. “This is a life and death situation for millions of Venezuelans. But UNHCR has received only a fraction of the funds it needs, to do even the bare minimum to help them survive.”

In February 2019, Jolie visited Bangladesh for three days to provide help for over 700,000 Rhoyinga refugees who have settled in the country. Jolie expressed concern over the challenges Bangladesh may face as a host country to a great number of refugees. Jolie was especially focused on making sure the refugees were comfortable and content after being forced to leave their home country, Myanmar. “I am here to see what more can be done to ensure Rohingya children can gain an education with recognized qualifications that they need to retain a clear vision for their futures, and, when conditions allow, rebuild their communities in Myanmar,” Jolie said. While there, she also created a new appeal of almost $1 billion dollars to support the rise of refugees.

Angelina Jolie’s fight to improve the lives of refugees dates back to 2002, a year after receiving the role as Goodwill Ambassador for UNHC for Refugees. Her consistent commitment to those who are displaced by force shows she is someone who genuinely cares for the lives of those who are struggling. Angelina Jolie is a prime example of someone using your voice and resources to help those who are in need.