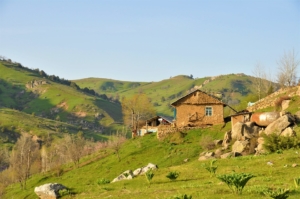 Uzbekistan is located in central Asia, and its citizens mostly live in rural areas with low housing, mostly congregated in the eastern half of the country. A big reason for this is the desertification of land in the western half of the country, particularly around the Aral Sea. The sea has also been polluted by pesticides and industrial waste, which has significantly impacted crop production in the immediate area.

All things considered, not only has the western half of Uzbekistan come to resemble a wasteland but the entire country continues to suffer water shortages to this day. Fortunately, agriculture in Uzbekistan is beginning to show signs of improvement in the eastern half of the country. Rural farming and agriculture accounts for more than one-third of employment, and is mostly focused on cotton. There is also a multitude of fruits and vegetables grown for at least local consumption and, in some cases, export. There is also a healthy silkworm cultivation sector.

Aid from The World Bank

In 2018, the World Bank launched the Additional Financing — Horticulture Development Project in Uzbekistan. The project focuses on improving horticulture, both in terms of productivity and marketability. Uzbekistan is currently transitioning from a state development focused economy to a private sector-focused economy, and the improvement of the agricultural sector can jumpstart economic growth in the country.

Hideki Mori, the World Bank’s Country Manager for Uzbekistan, said: “agriculture and rural development are at the heart of the transformation underway in Uzbekistan and the shift to horticulture is a big part of the Government’s investment strategy.” Indeed, most of the project is focused specifically on growing the horticulture sector commercially, with the diversification of crops cited as a major focus area. The overall goal is for rural areas to be able to cultivate better more produce than cotton. Fruits and vegetables will be the focus for exports, as they account for up to 50 percent of the value of crop output, as well as 35 percent of the sector’s trade value. Uzbekistan’s agriculture improvement begins with the diversification and increased marketability of its yields.

The shift toward diversified horticultural exports is already showing results. At least 45 Dutch trading companies are looking to partner with sellers in Uzbekistan, the first of many opportunities for increased profits. In addition to shifting the focus to diversified yields, there is also a focus on creating labor-intensive agricultural positions, providing regular work for many in rural communities.

With a solid agricultural base, Uzbekistan can both provide for citizens at home in terms of food and work, and with the trend toward export-driven growth, it can leverage that base to grow the new economy. If the country continues this way, there’s a lot of room for substantial growth, including into other sectors. Boosting agriculture in Uzbekistan can open doors for improvement in other sectors of the economy.