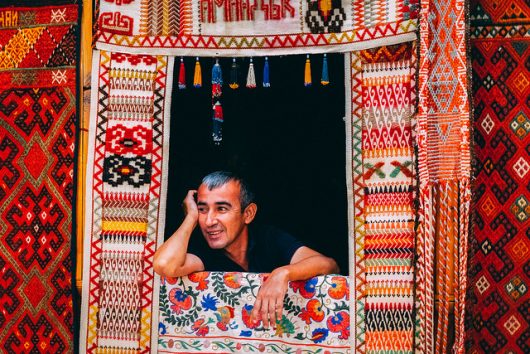 Uzbekistan is setting strong economic precedents for the European and Central Asian region. New supportive legislative policies have increased government spending on education and training programs. Global economists argue this is one of the main reasons Uzbekistan’s GDP has increased by more than eight percent the past three years.

Recent economic success is also attributed to growing economic freedom allowed by a currently changing Soviet-style economy. Uzbekistan has the most diversified economy in Central Asia. This provides an increase in GDP per capita, which has been increasing steadily over the past three years as well. Improvements in GDP per capita are strong indicators of improvement in personal living standards.

At present, the service sector accounts for about 45 percent of GDP. Examples of common Uzbekistan services include car repairs, the medical industry, teaching and the food industry. Not far behind services lies industry and agriculture. Uzbekistan is the world’s fifth-leading cotton exporter and seventh-leading producer.

Economic projections for the private sector show a steady increase over the next few years. Fiscal space in the government budget allows the economy to increase stimulus without increasing public debt. This leaves the public to continue growing in wealth while working simultaneously to steadily boost GDP.

Credit access in Uzbekistan is likely to increase due to recent banking growth. More money circulating through the Uzbekistan economy raises banking lending power. In the past, Uzbekistan banking systems limited access to foreign investments due to governmental regulations. Almost all money contributed had come from the domestic system.

Exclusive banking provided benefits such as domestic accountability. An increase in Uzbekistan credit access relied on loans by the population. Other past pros to this system included resilience to global financial crises. Banks proved most effective in 2014 when domestic capital injections provided immunity from failing global counterparts.

This, however, has changed in 2018. Total banking capital increased 26 percent in 2014, and this year banking directors met to discuss boosting central bank interdependence with foreign allies to target foreseen inflation rates.

Banking directors continue to emphasize the importance of regulation to create and maintain a newly inclusive baking system. The new system would include an interactive global policy regarding foreign loans and cooperation.

Smaller banking also influences credit access in Uzbekistan. A closer look reveals smaller economic changes, some of which include assistance from the International Finance Corporation (IFC). The IFC is a member of the World Bank and works to improve business in the private sectors of developing countries.

Private sector investments from the IFC have improved credit access in Uzbekistan in several ways. For example, the financial Markets Infrastructure Program (2009 to present) aims to create and improve credit information sharing. Members of the public can now receive an accurate prediction of loan repayment possibilities.

The current program also educates possible loan participants on formal risk factors associated with taking a loan. The certification for financial institution employees is the most prevalent in this project, as it allows job creation while creating a more knowledgeable private sector.

Expansion into the global economic sphere is a huge step for Uzbekistan, as previous years of Soviet-style economics would not have allowed this type of growth. Compared to its European-Asian counterparts, the Uzbekistan economy is at the forefront of balance and diversity.

The shift from exclusive banking to possibly inclusive is a prime example of the forward economic thinking propelling the country forward. Further improvements to liberalize the Uzbekistan economy, establish rule of law, social safety, constructive foreign policy and personal banking are also paving the way for success in the coming years.

31 Bits: A Woman-Owned Company That Is Combating Global Poverty IGATE Program in Zimbabwe Is Transforming Girls’ Education
Scroll to top