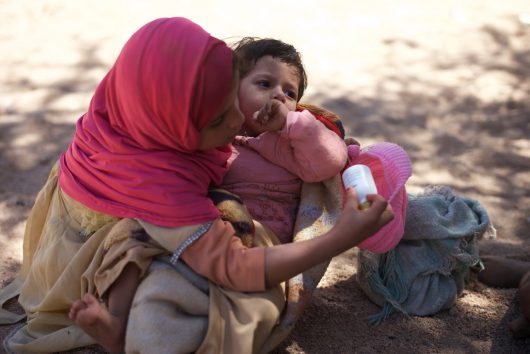 The leading causes of death among children around the world include preterm birth complications, pneumonia, birth asphyxia, diarrhea and malaria. Malnutrition has been reported to be the underlying contributing factor to these health complications. Although progress is being made in limiting the extent of malnutrition, many starving children from disadvantaged groups are being overlooked in this mission.

Despite the magnitude of malnutrition, some children continue to go unnoticed because of where they live or the circumstances in which they were born. The odds of a child surviving depend on factors such as whether the child is living in a rural area or if the child belongs to a disadvantaged ethnic group.

Children who are disabled or affected by war are disadvantaged when it comes to the aid they receive. Save the Children published a report in 2015 titled “The Lottery of Birth” that revealed in more than 75% of low and middle-income countries, inequalities in child survival rates are worsening.

The Save the Children report explains that although overall progress is being made in reducing the number of under-5 childhood deaths, this change is mostly attributed to the progress being made in more privileged groups of children. The report calls this disparity an “unfair lottery of birth” given that factors that are simply a matter of chance are determining whether children live to celebrate their fifth birthday. The report also notes that if the world were to pursue an equitable means of reducing child mortality, progress would ensue 6% faster over the course of 10 years.

In order to tackle the inequality that underlies the distribution of aid to malnourished children, countries need to follow in the footsteps of countries, like Rwanda, Malawi, Mexico and Bangladesh, that have combined rapid and inclusive reductions in child mortality, thus ensuring that no groups of children are excluded.

The U.N. also adopted the 2030 Agenda for Sustainable Development in 2015, which is replacing the Millennium Development Goals. This new framework is even more ambitious in its goals for child and maternal survival rates and in its commitment to work toward a more comprehensive solution for global malnutrition. The purpose of the Agenda for Sustainable Development is to ensure that all people can “fulfill their potential in dignity and equality and in a healthy environment.”

Although progress has been made, in order to more effectively and efficiently tackle the issue of malnutrition, poor and marginalized groups need to have access to the same quality services as any other group suffering the same conditions.