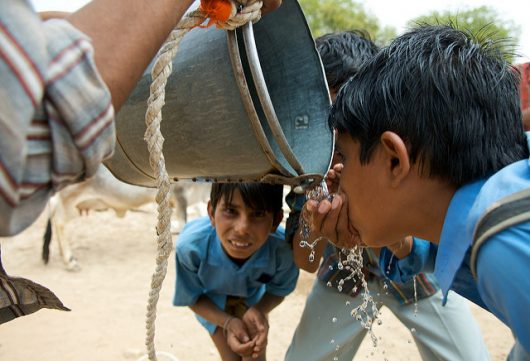 Even though half the world’s population now has water piped into their homes, access to the basic resource is not guaranteed. About 400 million people dwelling in cities in the developing world remain dependent on unreliable water systems, sometimes forced to wait up to 10 days if they miss the window of water supply.

A University of California-Berkeley civil engineering graduate sought to address this issue when she created NextDrop, a phone-based program that notifies people when water will be available.

Founder Anu Sridharan and her team of fellow graduates began to put their idea into action after winning the Big [email protected] contest in 2010. The year-long contest provides funding and support to teams of students who have innovative solutions for global challenges.

The system operates by collecting water flow information from valvemen who are responsible for opening and closing the valves that control water flow into various districts. By using NextDrop, households are typically alerted one hour before the valves open giving them peace of mind and the ability to carry out their daily tasks.

NextDrop has already reached 75,000 registered users in Bangalore, India. Now, USAID has announced plans to evaluate the effectiveness of the text message-based notification system and impact on quality of life.

If evidence from evaluations and surveys show NextDrop to be accurate and effective, funding will be provided for the service to be expanded into more major cities in developing countries.

As Phillip Denny, director of Big Ideas told USAID, “University-based programs like Big Ideas provide the perfect ecosystem for early-stage entrepreneurs by providing the resources, funding and ultimately the validation that allows ideas like NextDrop to thrive.”