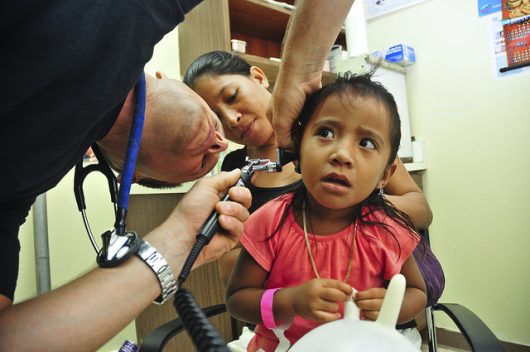 Childhood hearing loss is at an all-time high. The number of people with hearing impairments increased from 42 million in 1985 to 360 million in 2011. Hearing loss can be particularly hard on children since it affects the child’s ability to develop speech, language, and social skills. The WHO is working on treating childhood hearing loss, and here are some things to know about the condition.

Thirty-two million children are living with disabling hearing loss, and most of them are living in impoverished countries. More than 90 percent of chronic ear infections are in the Southeast Asian, Western Pacific, and African countries, as well as among the ethnic minorities of the Pacific Rim.

Three-quarters of children under fifteen years of age in low and middle-income countries have hearing loss that is preventable, but due to lack of access to healthcare, many children in impoverished countries do not get the luxury of treatment. Some examples of congenital causes of hearing loss, which are usually present before or during birth, are low birth weight, birth asphyxia, inappropriate use of drugs during pregnancy, or severe jaundice. Some causes of childhood hearing loss occur during the child’s lifetime and include infectious diseases like meningitis, measles, mumps, chronic ear infections, and collection of fluid in the ears. Chronic otitis, which describes any type of infection and inflammation in the middle ear, is one of the most common causes of childhood hearing loss.

There are many ways childhood hearing loss can be treated. If a baby younger than six months has signs of hearing loss, the baby should receive intervention right away. The earlier the intervention, the greater the improvement to a child’s development. Developing countries could also introduce more hearing aids, since only 10 percent are given the amount that they need.

There have been success stories about children being cured of their deafness. Recently, 16 Palestinian children were able to hear after Israeli doctors gave them cochlear implants. The Peres Center for Peace coordinated these 16 successful surgeries over the course of last year.

Since most hearing loss is preventable, how can people prevent their children from permanent ear damage? Providing better healthcare to impoverished countries can decrease the likelihood of children receiving ear infections that could result in hearing loss. Some precautionary measures include: immunizing children from diseases such as measles, meningitis, rubella, and mumps, immunizing mothers to prevent their unborn babies from receiving those diseases, providing hygienic practices including healthy ear care, screening children for otitis media and reducing exposure to loud noises.

Childhood hearing loss can be preventable and treatable if access to healthcare is provided.

What One Woman Is Doing to Bring Change to PovertyCan Cash Handouts Alleviate Poverty in India?
Scroll to top